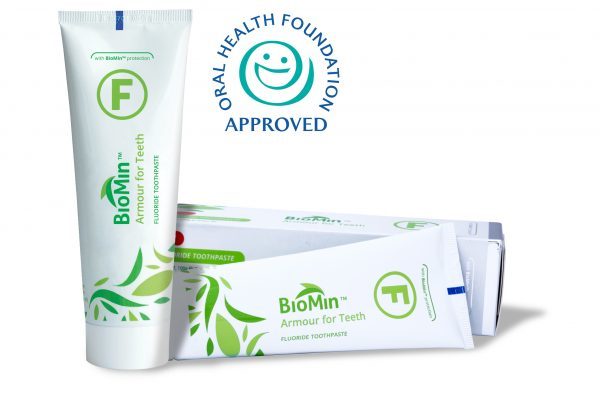 Biomin F toothpaste, delivering fluoride, calcium and phosphate in low but effective concentrations, is proving to be a game changer in the treatment of sensitivity and other problems caused by demineralisation of tooth enamel, says Moira Crawford.

Dentine hypersensitivity is thought to affect up to a third of the population at some stage. For most people, it is a relatively minor and transient discomfort, but for about 10% it can be severe and have a major impact on their quality of life. Many patients try a range of treatments, often without success.

The condition is caused when the enamel surface of the teeth is worn away or damaged, exposing the dentine layer below. The dentine contains microscopic tubules and, as hot or cold fluids trigger flow through these tubules (hydraulic conductance) they stimulate the exposed nerve endings in the pulp chamber, causing sensitivity.

Sensitivity is most common at the margin where the tooth meets the gums, either gum recession exposes the tubules or can be due to erosion where the thin enamel has been dissolved by acid attack.

A wide variety of toothpastes and other dental products are available to combat the pain and discomfort of dentine hypersensitivity, but due to the varied causes of the condition, no single solution works in all cases. Now, however, an innovative toothpaste, Biomin F, is available that takes a different approach to the management of dentine sensitivity through the use of bioactive glass technology. Biomin F works with the saliva in the mouth to neutralise acids and remineralise tooth enamel, occluding the dentinal tubules with acid-resistant fluorapatite and effectively preventing fluid flow to relieve sensitivity.

Biomin F is based on a new generation of bioactive glasses, developed in the laboratories of Queen Mary University, London. An optimum combination of fluoride, phosphate and calcium ions is incorporated within the structure of the glass itself and, as the glass gradually dissolves over up to 12 hours, these are released to neutralise acids in the mouth and deposit fluorapatite, the fluoride analogue of natural tooth enamel. This slow release action means that low but effective concentrations of fluoride are delivered to achieve a continuous effect compared with conventional toothpastes that contain soluble fluoride, which is rinsed away in under two hours. To ensure the toothpaste remains effective where it’s needed, Biomin F contains a polymer that adheres the fine glass particles to the tooth surface for many hours allowing, them to dissolve slowly, releasing the mineral ions.

The new generation of bioactive glass in Biomin F has a high phosphate content, which aids both the effectiveness and speed of the remineralisation. As the calcium, fluoride and phosphate ions are released, they work in concert with the saliva in the mouth to deposit fluorapatite, which is more stable and resistant to acid than standard apatite tooth surfaces.

Laboratory tests show that the fluoride in Biomin F is converted to fluorapatite as quickly as within 45 minutes in mineral rich artificial saliva. This remineralisation process continues for around 12 hours, with residual activity for up to 24 hours. A ‘smart’ effect has also been noted: at a lower pH in the mouth, for example following consumption of an acidic drink, Biomin F dissolves faster to restore the equilibrium and start the remineralisation process more rapidly.

Importantly for the treatment and prevention of dentine hypersensitivity, Biomin F works by occluding the dentinal tubules. Because of their very small size, the particles are able to enter the tubules, where they deposit fluorapatite preferentially on the apatite rich walls, occluding the tubules to prevent fluid flow (Figure 1), an effect still visible after acid challenge (Figures 2a-2c). Owing to the increased stability and resistance of fluorapatite, the tubules remain occluded more completely, and hydraulic conductance tests show a greater percentage reduction and faster remineralisation rates than other toothpastes tested.

New research has also proven that the remineralising effects of Biomin F penetrate deep into the tooth, not just the surface layer. Researchers artificially prepared demineralised lesions (white spot lesions) around orthodontic brackets, and compared the remineralising performance of Biomin F with fluoride gel and a control group. They measured the sub-surface enamel lesions’ depth and mineral density, and their response to treatment, and found that the Biomin group showed significantly better remineralisation values. They hypothesise that this was due to the low fluoride content of the Biomin, released slowly over several hours, which allowed the penetration of the calcium and phosphate ions through the porous enamel sub-surface, effecting the successful remineralisation of the demineralised enamel lesion, rather than simply remineralising the surface layer.

This remineralising effect can be seen by eye. US hygienist Theresa McCarter noticed a visible improvement in the density of patients’ tooth enamel after a few months of using Biomin. ‘One lady’s teeth were so translucent they were almost blue, and after using Biomin they were noticeably improved, especially in the terminal third where the tooth tapers,’ she said.

UK dentists are also finding that Biomin works. Dr Don Gibson in Yeovil commented: ‘90% of the patients that I have recommended it to are passionate about it and have come back for more. Some of the patients with the most significant sensitivity problems, who haven’t been able to find anything that works, have noticed great improvement.’

Dr Nigel Slattery from Little Lever, Bolton, Lancs, agreed. ‘Biomin F delivers the optimum amount of fluoride for benefit – you don’t need any more than that – and I like that it adheres to the tooth to be slowly taken on, looking after the teeth for 24 hours. That seems ideal,’ he said.

The fact that Biomin is a regular toothpaste, not an extra step in the oral care routine, will improve compliance, argues hygienist Theresa McCarter. ‘I see Biomin as becoming an everyday toothpaste benefiting 80-90% of our patients,’ she said. ‘It will be a game changer.’

Biomin F has gained approval from the Oral Health Foundation for its effectiveness at both sensitivity reduction and remineralisation. The Foundation has confirmed that brushing regularly twice daily with Biomin F ‘provides relief from dentine hypersensitivity and long-lasting protection against acid attack’.

For people who prefer not to use a fluoride-containing paste, Biomin C is also available.