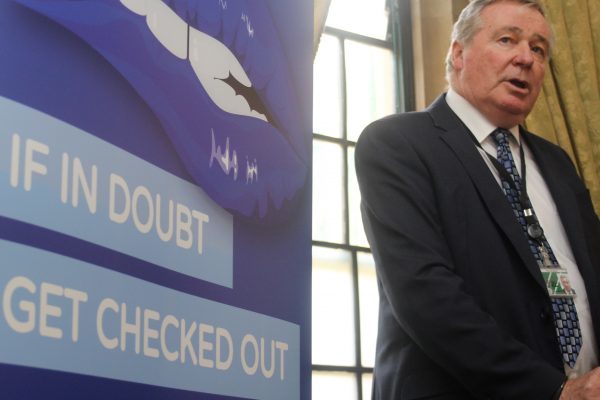 November is the Oral Health Foundation’s Mouth Cancer Action Month, and it was officially launched last week at the House of Commons.

More than 75 people from across 40 organisations attended the event sponsored in Parliament by Sir Paul Beresford MP.

Sir Paul spoke about the importance of campaigns such as Mouth Cancer Action Month, before highlighting the landmark decision made by English, Welsh and Scottish governments to introduce gender-neutral HPV vaccinations.

He said: ‘Since we started Mouth Cancer Action Month, awareness of this deadly disease has grown from a very low level to a point where most people have at least heard about the disease, but it is not enough yet.’

‘Even after the many years of successful campaigning, research still shows that 73% of UK adults are not fully aware of the main symptoms of mouth cancer.’

Dentists, hygienists and therapists all have a unique opportunity to carry out a mouth cancer check when patients attend for routine examinations.

As Dr Clover said at the House of Commons, research from Simplyhealth Professionals found that 83% of people in the UK do not check for signs of mouth cancer regularly.

He added: ‘When put together with the number of people still failing to visit the dentist regularly, shows why many cases of mouth cancer are found late.’

Free at the point of use

Dr Clover put his finger on the nub of the problem, namely that only around half the adult population visit an NHS dentist regularly, although a significant percentage see their dentist privately.

Added to this is the disincentive of having to pay an NHS patients’ charge for this examination.

All adults of a certain age are sent testing kits for bowel cancer, all of these are free.

Yet for oral cancer, first you have to take the trouble to attend a dentist, then you have to pay a patient’s charge.

It seems as if it is only the profession that takes awareness of mouth cancer seriously.

If the NHS believes that the rising incidence or oral cancer is a within its remit, as other cancers are, then let it start a proper system of screening and make it ‘free at the point of use’.