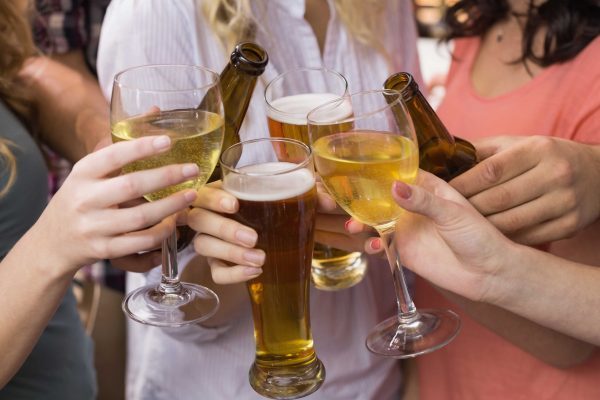 Middle-aged drinkers are being encouraged to introduce regular ‘drink-free’ days with a new campaign from Public Health England (PHE).

A Yougov poll found two-thirds of middle-aged drinkers find it harder to cut back on alcohol than eat healthily or exercise.

Those aged 45-65 are the most likely to drink more than the recommended 14 units of alcohol per week.

‘Having a day off drinking gives you a chance to clean your system and give your liver a rest,’ Dr Julia Verne, a spokeswoman on liver disease for Public Health England, said.

‘It also has an immediate impact on your sleep and calorie consumption.

‘People have also told us that the idea of a “drink-free” day is much easier to manage than cutting down.’

One in five adults in the UK drink more than the current recommendation of 14 units of alcohol per week.

The new Drink Free Days campaign, launched by PHE and Drinkaware, aims to raise awareness of the dangers of alcohol.

As part of the campaign, PHE and Drinkaware have launched the Drink Free Days website, where users can compare their alcohol consumption.

‘Many of us enjoy a drink,’ Duncan Selbie, chief executive at Public Health England, said.

‘But whether it’s a few in the pub after work a couple of times a week, some beers on the sofa watching the football or regular wine with our dinner – it’s all too easy to let our drinking creep up on us.

‘Setting yourself a target of having more drink-free days is an easy way to drink less and reduce the risks to your health.’