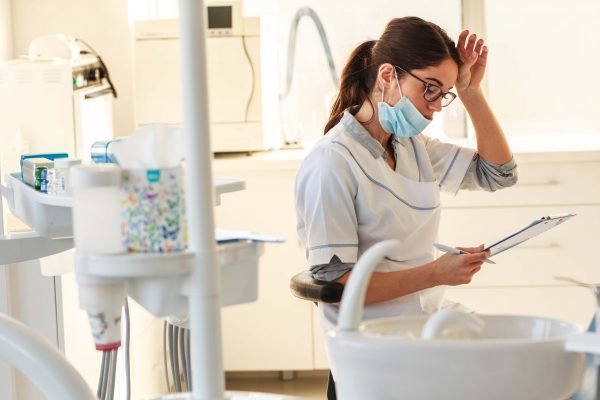 NHS dentists in England and Wales have seen their salary drop by 0.7% to £68,700, according to the latest NHS Digital results.

Scotland was the only home country where self-employed dentists’ salary increased, by 0.1% to £67,800.

Dentists in Northern Ireland experienced the biggest drop, by 4.3%, with average salaries for self-employed dentists now at £66,400.

These results continue the downward trend in NHS dentists’ real terms salary, which the BDA claims has dropped by 35%.

Despite the drop in salaries, dental charges have increased by around 5%.

Dentists are working longer hours with less annual holiday, according to the latest figures from NHS Digital.

There has also been a notable drop in the amount of time dentists spend on clinical work across the UK.

Principal dentists have also dropped the amount of time they spend on NHS work during the week.

The more time dentists spend working on NHS work, the lower their levels of motivation, the figures also show.

Over the last six years motivation of dentists has seen a gradual drop in England, Wales and Scotland.

Increasing expenses, a drop in income and regulations are listed as the main reasons for low morale.

The comments come after NHS Digital figures show Northern Irish dentists are the lowest paid in the whole of the UK.

Around 70% of practice owners in Northern Ireland describe their morale as ‘low’ or ‘very low’.

Kirklees Healthwatch backs calls for patients with healthy teeth to only visit the dentist once every two years.

It believes this will free up space for patients who are in need of further care.

Kirklees has been condemned for its oral health, with charity Dentaid offering free checks and emergency treatment in the area.

A move to two-year check-ups has been gathering momentum after being proposed recently in Scotland’s Oral Health Improvement Plan.

In June the NHS acknowledged the crisis in Kirklees and promised hundreds of extra NHS places in the area.

But the shortage of NHS dental appointments has forced the borough to look for alternative options.

Three major dental events – all under one roof

These free-to-attend events are all happening under one roof, on one day.

Find out here who will be speaking at which show.

The Dentistry Fees Survey is back.

Running throughout September and October, the survey will capture real insights, trends, similarities and variations in dental fee setting across the entire UK.

The plan is to provide dentistry.co.uk readers with a real measure of the average fees being charged for all sorts of dental treatments the length and breadth of the country.

We are offering a year’s free enhanced CPD and a free ticket to Stars of Dentistry 2019 in a free prize draw. The winner will be announced in print and on www.dentistry.co.uk.

To participate in the survey and have your say, simply visit www.dentistry.co.uk/feessurvey and complete the short questionnaire.

Around one in 10 children (12%) brush their teeth for under 30 seconds, a new survey has found.

And just over half, 58%, of parents said their children only clean their teeth for one minute and 30 seconds or less.

The most common reason children give for avoiding brushing their teeth is because it’s ‘boring’ (40%).

Almost half (46%) of parents worry about their child’s teeth as a result of their brushing habits.

A quarter (24%) have lost their temper whilst trying to get their child to brush their teeth.

Whilst 71% said they believe children’s oral health could be improved using technology alongside traditional brushing methods.

Wrongly fining people for NHS treatment is putting those on low incomes off going to the dentist, the BDA claims.

Almost 370,000 people were fined after being accused of ‘misclaiming’ for free dental care last year.

But the British Dental Association (BDA) says many of these fines are down to innocent confusions over paperwork.

The elderly, people on benefits and people with learning difficulties are all entitled to free dental treatment.

Treatments delivered to patients exempt from NHS charges have dropped by 2 million (23%) in the last four years.

More people under 34 are opting to visit the dentist for cosmetic procedures rather than a check up, new figures show.

Almost half of people aged 18-34 have had teeth whitening treatment, with over a third admitting they whiten their teeth at least once a week.

However, a third say they haven’t been to visit the dentist in over a year because they don’t believe they have any dental issues.

Almost one in four (17%) young Brits say stained teeth would negatively affect their self confidence.

This is because 46% of under-34s associate discoloured teeth with smelly breath, while 44% believe it’s a sign of poor hygiene.

Despite this, only 22% of respondents said they would fix missing or broken teeth.