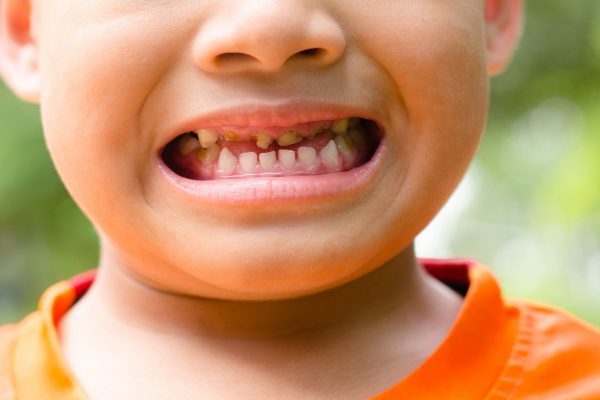 As many as 400 children with extensive tooth decay are stuck on a waiting list for up to six months in greater Glasgow and Clyde.

The delay for young, vulnerable Scottish children also happens in Forth Valley, Highland and Dumfries and Galloway where waiting times range from between 12 weeks and six months.

‘Six-months is a lifetime for children in pain and distress to have to wait for urgent dental treatment.

‘The impact of having rotten, septic teeth on a child’s health, wellbeing and development cannot be underestimated,’ said Pat Kilpatrick, national director of BDA Scotland.

The provisional figures on hospital waiting times obtained by the British Dental Association have found a squeeze on hospital funding and theatre-time for paediatric dental cases is leaving children in pain and distress.

The latest figures from the National Dental Inspection Programme shows more than two-thirds (69%) of five year olds have no obvious signs of tooth decay, but it also highlights that clear health inequalities persist.

Only 55% from the most deprived areas are free from tooth decay compared with 82% from the least deprived.

Pat continued: ‘Their symptoms are not confined to the mouth, as it can also affect their speech and growth, not to mention their confidence and ability to socialise with their peers and family.

‘The longer these children have to wait, the more likely they are to develop an infection, or abscess – and in the meantime they may have to take repeat courses of antibiotics to alleviate symptoms, which is anything but best practice, and could increase the risk of antimicrobial resistance.

‘While Scotland has made some progress in improving children’s dental health, much more still needs to be done, and this is no excuse for neglecting those vulnerable children most in need of dental care.

‘Funding to free up theatre space for the care of these children must be prioritised now.’

11hr
|
Dentistry
Dentistry Online uses cookies to give the best experience. If you continue to use our site, we will assume that you agree to the use of such cookies. Read More.
Accept