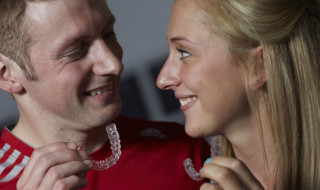 Team GB’s Olympic gold medal winners, Jason Kenny and Laura Trott, have even more to celebrate post-Rio, thanks to the help of clear aligner technology.

The golden couple’s desire to achieve more aesthetic smiles was ignited at the London 2012 Olympic Games, when the pair looked back at photographs of themselves kissing and biting their medals, which highlighted their irregular teeth.

‘You can see my teeth in all the photos taken of me, especially the close ups where I am biting my medals!’ explained Laura.

‘So I had Invisalign treatment because I am in the public eye and wanted to be able to smile with more confidence.’

Jason added: ‘In pictures taken over the last eight years I had become very aware that my teeth were getting worse and I want to be able to smile on the podium at the Olympics.

‘I had treatment to straighten my teeth to improve my confidence.’

Jason and Laura said that they opted for clear aligner treatment because it allowed them to continue to train and compete without impediment.

‘I wanted something I could wear which did not affect my mouth when training and competing’, said Laura.

The couple were treated by Dr Bilal Bhatti at his practice close to the velodrome in Manchester.

‘Laura and Jason wanted a treatment to straighten their teeth which would not affect their cycling performance’, Dr Bhatti said of treating the Olympic champions.

Laura was also drawn to Invisalign because of Clincheck, a digital prediction of the final outcome of their treatment.

‘I think it is a real bonus to be able to see what my teeth would look like at the end of my treatment and be able to give my opinion about the look I wanted to achieve before I start’, she said.

Just like many couples that opt for clear aligner treatment before their big day, another motivation for undertaking Invsalign treatment was the golden couple’s wedding following the conclusion of the Olympic games.

Thanks to the clear aligner technology, the Olympic gold medalist couple can smile with confidence not only on the winners’ podium, but at the altar too.

1643d
|
Celebrity News
Dentistry Online uses cookies to give the best experience. If you continue to use our site, we will assume that you agree to the use of such cookies. Read More.
Accept