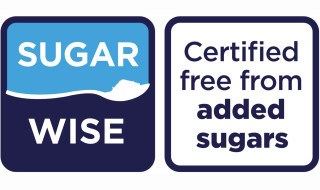 While the government’s Childhood obesity: a plan for action strategy (published earlier this week) was a major disappointment for many health campaigners, Sugarwise is happy that, by encouraging the uptake of lower sugar alternatives, it sits well with its kitemark scheme.

According to a statement released by Sugarwise: ‘The publishing of the childhood obesity strategy is a good step. Next what is needed is promoting the availability and visibility of low sugar or no added sugar products.’

In 2015 the World Health Organization stated, taken as a whole, the population should get no more than five per cent of their daily energy intake from free sugars. However, there has been no means for the public to distinguish between free and naturally occurring sugars in food.

She teamed up with chef Jamie Oliver to give evidence to the UK Health Select Committee on the issue of better labelling where they proposed a kitemark scheme to highlight options low in free sugars.

Tom Chess, chief scientist of Sugarwise UK and Cambridge University biochemist says: ‘While having measures in place to encourage reduction of added sugars in food and drink should be commended, it is technically very challenging to differentiate between the amount of sugar that has been added to food and the amount that is naturally occurring.’

Tom believes that the general public shouldn’t be relying on manufacturers to certify their own claims. ‘As far as I am aware’, Tom says, ‘the Sugarwise test is the only means of independently assessing manufacturer claims on added sugar – the only such method in the world.

‘It is certainly the case that all other ways of doing this would rely on manufacturers providing their composition information. The Sugarwise test is not only able to provide the figure for free sugars independently, but can quickly process large numbers of products, at a much faster rate than manufacturers could themselves.’

Shad Hoshyar, head of policy and public affairs at Sugarwise says: ‘There needs to be an independent body to verify sugar claims. While the obesity strategy is likely to propose reductions, who will measure this, ensuring that manufacturers with genuinely lower sugar products are fairly treated?’

Shad also believes that the obesity strategy should provide more incentives for lower sugar products, such as reduced VAT.

‘There are not enough products low in free sugars available on the supermarket shelves or in restaurants, cafes and other places people consume food. There are rarely low sugar cakes, biscuits, and other items where traditionally sugar is added. If we want our children’s diets to shift to low sugar products, there needs to be greater availability and visibility of these products. Low free sugar products do exist, and since launching the kitemark in March this year, Sugarwise has certified over 250 of them,’ Shad adds.

Tom says: ‘Sugarwise is already helping the public take control by allowing them to easily identify foods low in the sugars that are causing the current obesity epidemic.’

An app has been developed to help the public take control and manage their free sugar intake. The AXA PPP award-winning app was developed in partnership with Food Maestro and the NHS Guy’s and St Thomas’ Hospital, along with all the major retailers in the UK who are keen to provide and promote lower sugar alternatives.