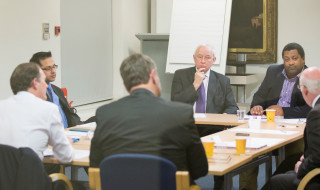 Should Britain exit the EU? We spoke to a panel of profession leaders at Dentistry magazines’s Dental Politics: The Big Debate to gain an insight into how leaving the EU may affect the profession.

Will the dental profession be helped or hindered if we leave the EU? In just a few weeks the polls will be counted and the future of the UK determined following the referendum set for 23 June. With much debate surrounding the impact leaving the EU may have on the profession, we asked some of the industry’s key opinion leaders just how much Brexit might affect the provision of dentistry.

This subject was of great importance at Dentistry’s roundtable discussion, Dental Politics: The Big Debate, in March, held at the British Dental Association’s national offices in London.

The EU in-out referendum brought an interesting debate to the table, with a mixed bag of opinions as to whether the UK should leave the EU. The debate kicked off with Roger Matthews, former chief dental officer at Denplan, stating: ‘We would have an awful lot more dentists who qualify overseas having to take the overseas registration exam (ORE).’

This was dismissed by Henrik Overgaard-Nielsen, chairman of the BDA’s General Dental Practice Committee, who argued for Brexit recently. At The Big Debate, Henrik said that whether the UK exits or not, the decision on dentists entering the UK after studying abroad is down to the government. He explained: ‘The training approved by the government or GDC after Brexit is down to the GDC, but what happens in the future will be up to the British government after Brexit.’

Kevin Lewis, dental director at Dental Protection, jumped in on the debate, discussing the effect leaving the EU may have on the workforce. Kevin said: ‘The difficulty that I see going forward, is that if they [the GDC] haven’t got to accept them [European dentists], somebody is going to have to look at the workforce questions all over again.’

With dentists who qualify overseas having to take the ORE, will this leave us with fewer dentists due to the barriers? Kevin continued: ‘Without the European dentists coming in, I think the corporates would have struggled to fill the seats in the surgeries to be brutally honest.’

Practitioner Neel Kothari replied: ‘Increasing supply has definitely weakened the profession’s position with the government, so I can’t see why they would do anything to handle that.’

The cost of running a dental practice

Henrik went on to consider Secretary of State for Foreign and Commonwealth Affairs Philip Hammond’s talk at Chatham House, in which he referred to the problems ahead if the UK exits the EU. Henrik said: ‘He [Philip Hammond] said one of the problems is going to be that if Britain leaves [the EU] and gets a decent deal then the problem for everybody else is that all the other leaders will look over their shoulders, the people from the other countries will then be interested in that deal. You just sit back and think “what sort of group is this?” If all the people around Europe really want a free trade deal and nothing else why, are we sticking to a political economical union?’

Neel went on to summarise his opinion on the effect of Brexit on dentists. ‘Whether there are things that are hampering people to come over or not, I don’t think it is going to make much of a difference in terms of dentists. I can’t see dentists not wanting to come across [to Britain] and I can’t see the government not wanting gaps to be filled.’

Neel’s thinking was agreed with by the chair of the debate and Dentistry’s editor, Julian English, as well as Henrik Overgaard-Nielsen.

‘I don’t think it is the dentists that are going to be the problem, I think it is the nurses and the ancillary support that comes with it,’ Neel continued. ‘If you take poorer areas and if you look at the number of foreign dentists in the areas where typically dentists have graduated in UK institutions, and have decided they don’t want to go; those are the areas that are largely serviced by people who have not necessarily graduated from the UK. I think that is where some of the problems are going to be. How do you then say “well now we need to incentivise those areas to be served”, and if we don’t, how are we going to find healthcare in those regions?’

The subject of employment continued, in which Henrik stated that a number of people think there are too many dentists for the number of vacancies available. ‘Again from a union perspective, this is not a good position for us to be in,’ he said. ‘With fewer dentists, I would hope we would be able to negotiate a better deal than the 1% or the 0.7% of the contract value that we seem to be getting this year.

‘That will be my hope, aside from where other people are coming from, but the government might still want everybody to come in.’

Neel Kothari brought the discussion to a close by stating what he believes will happen if the value of the pound decreases. ‘If the pound does drop as a result of us leaving, then that may have a bigger impact on whether people decide to come across [to the UK] or not – not just from Europe but from outside of Europe as opposed to what the GDC says.’