Should we learn to live with UDAs? 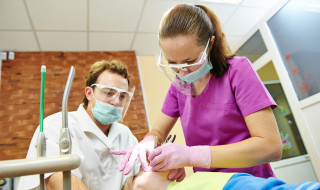 Should we learn to live with UDAs?

Maybe we should stop waiting for a new dental contract and live with UDAs, Michael Watson suggests.

To quote Wikipedia, the two-act play features ‘two bedraggled companions’ Vladimir and Estragon who ‘ramble and bicker pointlessly’ throughout.

They are waiting for ‘an unspecified person called Godot’, who never arrives — that in a couple of sentences is the plot of this play.

I called this to mind as dentists are witnessing a similar play: Waiting for the New Contract.

Yes the next new contract is Godot – no one knows what it is or what it will be like, no one knows when it will come, although it might be in 2019 or perhaps 2022.

We hope it will see the end of UDAs, but looking at the prototypes it won’t, they will still be there for band 3 and possibly band 2 treatments.

We want it to reward prevention rather than ‘activity’, without specifying how this is to be done.

I think it is time, after 10 years, that we learned to live with UDAs – heresy I know – but there’s nothing else on offer for the foreseeable future.

There must be more teamwork; in a larger practice the work needs to be given to the most appropriate person to do it.

There is a drive to start seeing children from age one, when they have about eight teeth.

Do you need a BDS to count these teeth?

And after you have spent 10 seconds doing this, what happens to the remainder of the one UDA fee (£25 on average)?

The patients’ parents need advice on diet and toothbrushing, delivered not by a dentist but by a therapist-led team.

The UDA provides at least a band 1 payment every six months from ages one to five, perhaps £50 a year for four years.

So, what do practices do?

They give all the money to the dentist, because only dentists can deliver UDAs apparently and they must preserve the associates’ self-employed status.

Patients want access to dentists outside working hours, we should be seeing 100% of the child population not 70% and the problems of periodontal disease, especially among the growing diabetic population, needs to be addressed.

A radical rethink is needed about how to deliver a better service within the confines of the existing contract.

This falls to practices themselves, not the Department of Health, not NHS England, not the vague promise of a new contract.

The last word should perhaps come from the Wikipedia description of the play: ‘They then speculate on the potential rewards of continuing to wait for Godot, but can come to no definite conclusions,’ – that’s it precisely for dentists.