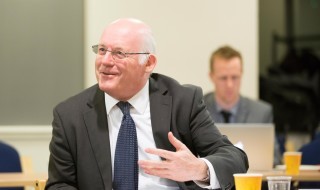 Seb Evans caught up with John Milne to ask him about his time at the CQC.

Regulation is the buzzword in dentistry at the moment. The General Dental Council (GDC) is taking up a lot of the headlines, but there is more than one regulator. In contrast to the GDC, the Care Quality Commission (CQC) has been receiving praise after it promised to cut its inspection fees for dentists.

Advising the CQC on the direction it should be taking in dentistry is John Milne, who joined the CQC as senior national dental adviser in March 2015. John’s previous role was chair of the British Dental Association’s (BDA’s) General Dental Practice Committee. In this role he had experience working with the CQC, meaning he was in a good position to move across to the regulator.

Prior to the CQC, Primary Care Trusts regulated dental practices. But this was only for NHS practices – private practices weren’t regulated at all. Despite this, CQC inspections weren’t greeted with open arms when they were first introduced.

‘When it was announced that the CQC was going to take on dentistry we didn’t understand why we needed another regulator,’ John Milne said.

‘At that time I went to see the minister to say “why are you doing this? We don’t need this”. Primary Care Trusts were regulating dentistry. Little did we know PCTs were about to be abolished. So bringing the CQC in meant that there was oversight of all general dental practices, NHS and private.’

The CQC regulates systems and places where care is provided, looking at whether services are safe, effective, caring, responsive and well led.

‘When the CQC started, the dental profession’s criticism of the inspection process was that it wasn’t carried out by people with in-depth knowledge of how dental practices work,’ John explained. ‘But over the next two or three years there were some changes at the CQC and the organisation began to talk much more with the BDA, and I saw those changes happening.’

This openness and willing to interact with the profession is something John is very passionate about. ‘One of the things that I’ve found most encouraging about the CQC, is the leadership at the top,’ he said. ‘Our chief executive, David Behan, encourages us to be open, to be enquiring and also to be reflective about our work. Because the purpose of that work is actually to act as a catalyst for improvement in care, whichever area it is. And I’ve found that the CQC makes a pretty good stab at doing what it says on the tin.’

Dental practices were deemed as low risk by the CQC in 2015, prompting it to move to a model of only inspecting 10% of practices, using a risk and random approach.

This approach to inspecting practices is continually up for review. So is only inspecting 10% of dental practices in the UK enough? ‘Some people feel 10% is too low,’ John explained. ‘The answer from me is that until we’ve had a look at what we’ve got from the second year of doing the inspections, I don’t think I can give that a good enough answer, because I don’t have enough data to know whether 10% is right.

‘However, what we have found is the vast majority of practices are offering really good care. So there may not be a strong reason to be moving away from the 10% figure, but there are some in and outside the profession who think it’s no way near enough. I’m waiting until we have more information.’

The CQC received praise from the profession in November 2015 when it predicted its fees to drop in dentistry. This came about after the CQC started inspecting only 10% of all dental practices. So why didn’t fees drop to only 10% of the original figure as well?

‘The fees aren’t my area of expertise,’ John explained. ‘But the cost of CQC regulation isn’t just down to visiting practices. The visits themselves use more people than they did before, because they involve a more expert inspectorate, so there are costs associated with that.

‘The other element is the costs of running the CQC and things outside of the actual inspections, the registration process etc.

‘The CQC is quite open about its costs, there’s been a recent consultation about them and we’re involved in discussions with the BDA about whether the costs are fair and whether the division of costs between practices is fair. I’m always aware, because I’m a ‘wet-fingered dentist’, that it’s the dentists that pay for it.

‘At the moment, the dentists are paying the full costs of the CQC process. The government subsidy to the CQC for other areas is likely to be altered. So the whole cost of the CQC will be under the microscope and we’re being asked to make savings across the board.

‘GPs are facing rises in their CQC costs. The proposals for dentistry are to actually reduce the costs if that’s possible.’

Many from the profession are now saying that they are over-regulated and are calling for a drop in red tape. Do we need so many bodies to help regulate dentistry?

‘The government, through its red tape challenge, is looking at whether regulation is proportionate and whether it can be reduced,’ John said.

‘In terms of any future reduction in regulation, it would be interesting to see how that pans out. For instance, I think in Australia one regulator looks after numerous professions. So whether that’s a line of travel the government wants to go down we’ll have to see.

‘Kevin Lewis has said in Dentistry magazine to be careful what you wish for. Speaking as a dentist, I would like my regulator to know about dentistry and not be a subset of somebody else’s regulator. That is why one of the things I’m pleased about with the CQC is that we do have people with skills in dentistry.

‘The GDC has been criticised for all sorts of things, but it is a dental-specific regulator. As a dentist I’m happy to see that.

‘The CQC is also leading the work of bringing the regulators together. It’s called the Regulating Dental Services Programme Board (RDSPB). Effectively that’s trying to work with the GDC and NHS England to reduce duplication and the stress that brings to practitioners.’

‘One of the key aims of the CQC process is to encourage and catalyse improvement,’ John explained. ‘Dentists can obtain support from LDCs, the BDA and other organisations.

‘We also publish inspection reports that may be helpful to the profession, and we have published “mythbusters” on our website that may assist practices. The vast majority of practices are able to demonstrate and provide evidence of really good care.

‘We also collect examples of “notable practice” that the whole profession can use and implement. So if a practice is doing something that we think everyone can benefit from, we can list it on our website. We’re starting to look for those and we’re hoping to build a repository of notable practice. The CQC wants to hear from dentists about any notable practice, so we ask them to get in touch.’

What does the future hold for the CQC?

When John first took on the role at the CQC he explained that is was the issues surrounding regulation and the future of regulation in dentistry that made the job appeal to him. A year on from when he first arrived, CQC inspections have reduced and become a lot more dental focused, CQC fees will reduce and the majority of dentists were found to be offering good and safe dentistry. So what’s next for the CQC?

‘We will be continuing our existing programme of visiting dental practices of all types,’ John said. ‘We aim to look at 10% in any one year. By the end of 2016/17 we will have inspected 20% of practices using our new methodology and the results of that process will inform how we continue to regulate dentistry.

‘The CQC also inspects care homes, amongst numerous other healthcare services. We know that oral health is variable for those in care homes, and we hope to explore how this could be improved. Poor oral health does affect general health and wellbeing and can affect both dignity and comfort for some vulnerable older people.’

John Milne qualified from Leeds Dental School in 1980 and has worked in general dental practice since then. He is currently an associate in a practice near Wakefield. John has been involved in dental politics at both local and national level, representing colleagues through the local dental committee and at national level as chair of the BDA’s General Dental Practice Committee where he has been involved in NHS contract reform.

He has also worked as a clinical assistant in orthodontics at Mid Yorkshire Hospital Trust and as dental adviser to Wakefield Primary Care Trust.