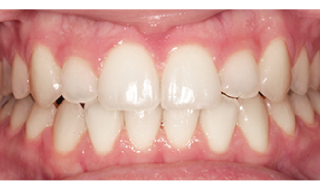 Demand from the public for an improved smile is on the increase. More patients are aware that having a great smile is no longer restricted to celebrities. However, they are also increasingly aware that the preparation of teeth for crowns and veneers can have a significant biological and financial cost. Many also have objections to conventional orthodontic treatment, due to the visibility of braces and lengthy treatment times.

Hot off completing my Six Month Smiles course, I picked up my phone on Monday morning and started calling patients that I had previously identified as wanting straight teeth, but did not want to be treated with traditional orthodontics or clear aligners.

One patient was a 29-year-old local nurse named Betty. She had a class I relationship, an admitted self-conscious smile, and I knew correcting her chief complaint would give her a dramatic and fantastic result. She already had the desire, she just needed the opportunity. I offered Betty a $500 discount if she would be one of my first five to start Six Month Smiles treatment. Her response was a resounding yes.

Betty’s chief complaint was centered on her lateral incisors in cross-bite, which made her canines appear more pronounced, and in her opinion made ‘it look like I am missing teeth.’ Following my examination and completed records , I felt like we could correct the anterior cross-bite by allowing the Lucid-Lok archwire to round out both arches in addition to some mild IPR in the maxillary arch as needed. I also identified a posterior cross-bite with teeth UR5 and LR5 that we would attempt to correct.

As I learned in the course, the day the braces went on, I immediately put my priority on creating space for the laterals. I did some light IPR to free up the proximal contacts, but felt like correcting rotations of adjacent teeth would create enough room in the arch. I utilised the open coil spring to rotate the canines and centrals away from the space, which simultaneously exaggerated the force applied by the .014 wire to round the arch. I then utilised the elastic ligature to tie the bracket to the wire to initiate a light buccal movement as that space was created. I placed bite guards on the upper second molars, and followed otherwise conventional Six Month Smiles protocol.

What I saw in one month was impressive, and what little doubt I had left was blown away. The patient was ecstatic too.

I removed the coils and placed power chains to facilitate the final rotation of the centrals and the canines (UR3-UR4, UR1-UL1, UL3-UL4). At eight weeks, the wire was tied in to engage the slots on the brackets of teeth UR2 and UL2. One week later at nine weeks of treatment, the laterals had taken position bucco-lingually in the arch, the posterior cross-bite was corrected, and biteguards were removed.

The rest of the treatment utilised some anterior vertical elastics to facilitate final coronal position of the laterals, the POP pliers to rotate the distal aspect of the laterals into the patient’s desire, and powerchains to close all contacts throughout both arches. A fixed bonded lingual retainer was placed on the lower prior to debonding the brackets and a clear essix-style retainer was fabricated for both arches and delivered that day. We removed the brackets at 23 weeks, just shy of six months.

As a nurse, Betty is pretty good at showing restraint and not revealing her emotions, so I was not surprised that there was no crying when treatment was completed, but a polite ‘Wow!’ and ‘Thank you’. Her actions spoke a little louder than her words did. It was revealed to me that night by a coworker that she went straight to work, on one of her few days off, to show off her new smile. She had every right to do so. She was proud of her new smile and my staff and I were excited about the results we achieved in less than six months.

With the help of proper training and planning, my first case was a great success. I look forward to continuing to give my patients straight teeth in a short amount of time. Six Month Smiles provides a minimally invasive and cosmetic solution for my adult patients with misaligned, crowded, or spaced teeth. I am so glad that I committed to take the course and can proudly offer Six Month Smiles to my patients.