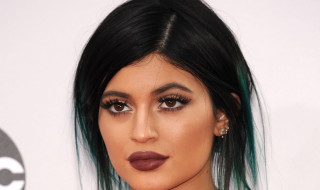 Kylie Jenner has been snapped sporting some over-the-top mouth wear by her boyfriend.

Rapper Tyger shared a photo of the 18-year-old reality star and model donning a diamond grill on her lower arch, to his Instagram page.

The photo, captioned ‘Augghhh’, by the 26-year-old rapper, garnered significant attention from fans, with over 179,000 likes and 3,500-plus comments.

In the photo, Kylie snarls at the camera while donning an extravagant pink wig, the same hair piece that the Keeping Up with the Kardashians star wore on Valentine’s day.

Kylie is an old hand at sporting mouth grills.

The TV personality also wore a gold grill to the American Music Awards in 2014.

Despite rumours of a rocky relationship, the young couple spent Valentine’s day together in New York City, according to a photo posted to Kylie’s Instagram account.

The pair were in the Big Apple for New York Fashion Week.

Keeping Up with the Kardashians is currently airing its 11th season.

The show follows the high lives Kardashian clan, as well as Kylie and her sister, 20-year-old model, Kendall Jenner.