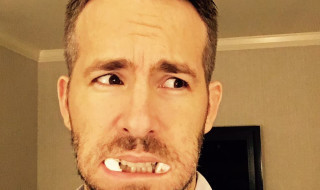 Ryan Reynolds has surprised a fan in a bid to ease her suffering after undergoing surgery to remove her wisdom teeth.

Captured on video by her mother, Mariah Boyle woke up from a nap after wisdom tooth surgery to be told that she had missed Ryan’s new film, Deadpool, in cinemas.

In the video, Mariah is heard sobbing through a mouthful of cotton wadding: ‘I didn’t see Deadpool!’

Mariah’s mother posted the video to Ryan’s Facebook page, with the caption: ‘Mariah Boyle getting her wisdom teeth out #ryanreynolds #deadpool’.

Upon seeing the video, Ryan was quick to sympathise with the fan.

The Hollywood actor not only shared a picture of himself with cotton wadding to match Mariah’s, he also offered the fan free tickets to the Deadpool premiere.

Ryan said: ‘Mariah Boyle, am I the only one who thinks the tooth fairy is a giant f*****g stalker?

‘I mean seriously, who leaves two tickets to the Deadpool premiere under your pillow?

‘And by the way, Rita, your breakfast casserole looks divine! Please bring some to New York.’

Mariah and a friend travelled to New York City the next day to attend the Deadpool premiere.

1641d
|
Celebrity News
Dentistry Online uses cookies to give the best experience. If you continue to use our site, we will assume that you agree to the use of such cookies. Read More.
Accept