Oral cancer now the 10th most common cancer in men 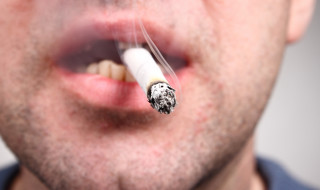 Oral cancer now the 10th most common cancer in men

Oral cancer has now been declared the 10th most common cancer detected in men, according to new figures.

‘It’s a real concern that oral cancer cases continue to climb and has now broken into the top 10 most common cancers in men, especially as the majority of cases are preventable,’ Dr Richard Roope, Cancer Research UK’s lead GP, said.

‘The combination of tobacco, drinking alcohol and HPV provides a toxic cocktail that has led to this rising tide of cancers, so it’s vital that people are aware of how to reduce their risk.

‘If oral cancer is found at a late stage, treatment options are more likely to be limited with long-lasting side effects and the chances of survival are poor.

‘It’s because of this that we’re working to raise awareness of the risk factors of the disease as well as helping doctors and GPs spot the signs and symptoms and have the knowledge they need to act.’

Oral cancer is now the 15th most common cancer found in women, according to the figures.

‘Delay is costing lives, so it’s vital that front line health professionals have the tools and the information to reduce the risk of the disease and get patients diagnosed as quickly as possible.’

Around 90% of oral cancer cases can be linked to major lifestyle or other risk factors.

An estimated 65% of oral cancers are linked to smoking, the human papilloma virus (HPV), drinking alcohol and having a diet low in fruit and vegetables have also been linked to oral cancer.

Higher smoking rates in men are largely responsible for the greater number of cases in men and an estimated 70% of oral and pharyngeal cancers in males in the UK are linked to tobacco smoking.

‘We know that the vast majority of oral cancer cases could be prevented, so it’s important that people know how to reduce the risk of the disease through lifestyle factors,’ Professor Richard Shaw, a head and neck surgeon based at the University of Liverpool involved in developing the GP and dentist toolkit, said.

‘Alongside this, it’s vital that GPs and dentists can spot signs and symptoms of the disease to help catch it early and that they feel confident in knowing the next steps they should take in referring patients for further tests.

‘Having seen the devastating impact that oral cancers can have, I hope this toolkit will help more cancers being detected at an earlier stage, when treatment is more likely to be successful.

‘I can only see a limited number of patients every week, but this toolkit means more people will have the knowledge to spot the disease early.’