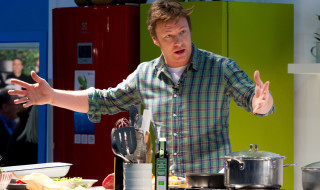 Jamie Oliver has slammed the sugar content in breakfasts currently on sale, calling them ‘sugary sh**e’.

The TV chef has been campaigning with other health experts to help the Government tackle the crisis of obesity in UK schools.

‘Most people don’t have breakfast,’ Jamie Oliver said in an interview with The Sunday Times.

‘It means you’re three times more likely to be overweight or obese.

‘Normally, the people who try and solve your breakfast problem are the biggest w*****s in the food industry.

‘If you analyse what they’re selling, it’s sugary sh**e.

Jamie Oliver went on to say that his TV programme Sugar Rush had affected him a lot.

He explained that he had been meeting with paediatricians in hospitals recently who had been spending most of their time ‘pulling bloody teeth out of kids, and they’re furious.’