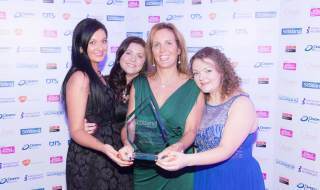 After walking away with the Practice of the Year at the Dentistry Scotland Awards 2014, we caught up with Eimear O’Connell to find out what she thought of the night.

Dentistry.co.uk: How does it feel to have won the Practice of the Year 2014 award?

Eimear O’Connell (EO): Well, I was quite shocked but it’s really very good. Our patients are very excited by it and the staff are well motivated by it as well, which is good. It’s given us all a confident boost I would say.

Dentistry.co.uk: Did you enjoy the evening?

EO: It was great fun although I had back surgery the week before.

It wasn’t painful but I probably shouldn’t have been having the glass of wine I was having.

Dentistry.co.uk: What do the Dentistry Scotland Awards mean to you?

EO: We are very proud to be a representative of the dentistry that is available in Scotland, and we’re keen to lead the way. So it was very good to go and get recognised for doing that and it was good to go to something that actually gives feedback and makes you feel like all your hard work has paid off.

Dentistry.co.uk: What do you think the awards are doing to the standards of dentistry in Scotland?

EO: Anything that promotes dentistry, either within the field of dentistry or to a wider audience, has to be good and has to be positive. If you get recognised within your own field, hopefully it encourages more people to try harder and to do better.

Dentistry.co.uk: Why do you think you won?

EO: I think it’s because we showed such enthusiasm for our work. I’ve been a dentist for a long time and I still really love it, there’s not a lot of people who after doing the same job for 20 years can say: ‘I love it’.

Obviously I’ve carved my own path because I went into the private sector 15 years ago and that allowed me to reinvest in my practice and my team. That’s been possible because I got autonomy over what I do and the decisions I make and that makes it more enjoyable.

Dentistry.co.uk: Is there a secret to running a successful practice?

EO: Hard work! I think probably the most important thing is the desire to do a good job for the patient and I think that whether you’re NHS or private, it’s the patient that’s the central part of what you’re doing.

Dentistry.co.uk: How do you see dentistry evolving in the future?

I think if you are well off and you’ve got access to good dentistry and you choose to buy it you will probably get less intervention and less loss of tooth and you’ll keep your own teeth for life.

If you follow along the path of less resistance and less cost then you’ll probably have more maintenance and more aggressive work done.

Dentistry.co.uk: Do you think you’ll be entering the awards again this year?

EO: Yes, I think we might enter some for the team rather than myself, but we’ll definitely enter on some level.

I don’t know if we’ll go for practice of the year because obviously we’ve won so many things – we don’t want to then come away with nothing! But we may enter different team members.

Dentistry.co.uk: You were recognised at Dentistry Awards as well weren’t you?

EO: Yeah we got the UK Dental Business Award, which was quite impressive. I’ve had a hectic year.

I decided that I would enter various things because of being 20 years in practice this year, 20 years owning my own business. That was the stimulus to do something to mark it.

Dentistry.co.uk: Do you have any advice to pass onto newly qualified dentists?

EO: Maintain your enthusiasm and try to learn as much as you can.

I think that even after 20 years I’m still leaning lots and I think that it makes dentistry more exciting.

I’ve tried different things I’ve tried implant dentistry and I’ve tried touching on sedation, so I’ve constantly updated and reskilled myself so that I can have challenges. This makes it more interesting and also means you can offer your patient whatever they need.

To enter the 2015 Dentistry Scotland Awards, please call the awards team on 0845 184 1498 or visit www.dentistryscotland.co.uk/awards.