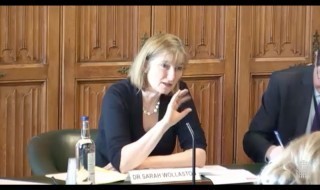 Sarah Wollaston, who led an inquiry into the under-fire General Dental Council (GDC), has criticised its defence of much-higher fees.

And she described the evidence her committee heard about the scale of rotten teeth in children from many poorer areas as ‘staggering’.

Dr Sarah Wollaston, a Conservative MP, spoke to Dentistry after the Health Select Committee she heads carried out two probes in the dying days of the Parliament.

The committee was unable to complete reports into those hearings before MPs packed up for the general election, but she gave her verdict on both the inquiries to this magazine.

The ‘accountability hearing’ with the GDC was sparked by its huge registration fee hike, a 55% rise from £576 to £890, which a judicial review criticised for procedural error.

In evidence, William Moyes, the GDC’s chairman, was defiant, acknowledging dentists had lost confidence in his organisation – but insisting much of that unhappiness flowed from ‘misconceptions’ about its role.

Dr Wollaston said: ‘There was some surprise that the GDC didn’t have an insight into why dentists have been so angry about this process.

‘They seemed to want to put it down as a minor issue of process as the reason why it was thrown out by the court.

‘The statement they put out after the judgement struck me as somewhat insensitive – and I’m sure that would be classed as an understatement by many dentists!

‘I think they should reflect on how they allowed it to get to this position.

‘It was the scale of the increase in the fees in a single year that was the problem – and they should have been able to see that coming.’

Dr Wollaston agreed the GDC’s priority was patients – not dentists – but she added: ‘Those two things are not mutually exclusive.

The Health Committee also investigated high rates of dental caries in children in many areas, attacked by dentistry minister Earl Howe as ‘unacceptable’.

The Conservative MP said: ‘It is staggering, both the cost of this to individual children and to the NHS when so much of this is preventable.

‘And it’s striking that the most common cause of admissions to hospital among children is dental decay.’

Ms Wollaston urged the NHS, in a ‘five-year forward view’ recently announced, to include a ‘much greater focus on prevention and health inequalities’.

And she said: ‘We have to reach the children in communities that traditionally don’t pick up the services that are offered.’

The committee chairwoman also gave her personal backing to re-examining the case for adding fluoride to tap water, saying: ‘It is a cost-effective measure in areas with high levels of dental decay.’