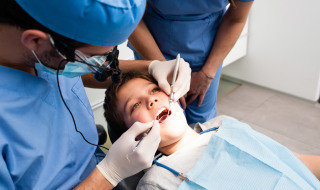 Children are having rotten teeth pulled out unnecessarily because of a ‘crisis’ in specialist services in the community, MPs have been told.

An inquiry heard evidence that a growing shortage of paediatric dentistry specialists is forcing youngsters to undergo the traumatic operations under general anaesthetic.

The claim was made by a consultant at Leeds Dental Institute, who warned of a ‘withering’ of specialists in recent years – sending children to hospital for extractions that could have been prevented.

But Dr Barry Cockcroft, the chief dental officer, denied there was a shortage and told the health select committee that the argument was ‘very simplistic’.

The competing arguments came at a one-day inquiry by the committee, held because of growing concern about the high level of dental caries.

The committee heard evidence from Stephen Fayle, a consultant in paediatric dentistry at Leeds Dental Institute, who said: ‘Imagine you have got a child with toothache, infection – perhaps with repeated bouts of toothache keeping them awake at night.

‘These children are waiting 18 weeks – four months – to be seen by a specialist and then, in some cases, it’s taking over a year to get them treated.

‘That’s where the crisis is.

‘The number of specialists to deal with children and prevent them needing to come into hospital for general anaesthetic or more advanced care has really dwindled.’

Asked if the shortage had directly led to an increase in tooth extractions in children, Mr Fayle replied: ‘I truly believe it has, yes.’

The claim was backed by Professor Nigel Hunt, dean of the faculty of dental surgery at the Royal College of Surgeons, who said: ‘It has not become a priority in certain areas, as perhaps it should have done.’

And the MPs were shown a map revealing huge swathes of the country where there are no specialists at all, according to the British Society of Paediatric Dentistry.

Furthermore, more than one third of the workforce started work 30 or more years ago and are likely to be nearing retirement.

Dr Cockcroft agreed more specialists should be heading up teams in primary care, rather than based in hospitals, but disputed there was a shortage – or a link with the level of extractions.

He said: ‘They are highly-trained and highly-skilled and should be focused on the very complex work that they can do and general dental practitioners can’t.’

The worrying dental caries statistics have sparked fresh calls for fluoride to be added to tap water, to cut decay.

The number of under-fives admitted to hospital is up to 45% lower in areas where water is fluoridated, official statistics show.

Quizzed about fluoridation by the committee, Dr Sandra White, of Public Health England (PHE), said: ‘It’s safe and effective – the cheapest way to get fluoride onto teeth.’