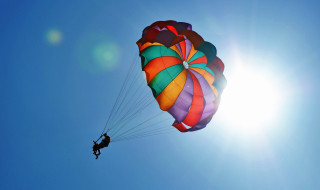 The sky really is the limit for one employee of Geistlich Biomaterials, who tackied a skydive for dental charity Bridge2aid despite her fear of heights.

Kalah Arnold, clinical science manager for Geistlich Biomaterials is scared of heights. Terrified, in fact, is a better description – and one that was used by her on numerous occasions in the weeks leading up to her charity skydive.

And yet on the morning of Sunday 16 November, with a little friendly encouragement and only a few last-minute tears, she leapt from a plane circling 15,000 feet above the Lincolnshire town of Hibaldstow into minus 20 degree temperatures.

A 60-second freefall was followed by a six-minute descent under the parachute, before arriving safely back on terra firma. After a significant calming down period, Kalah said of her skydive: ‘Would I do it again? No! It was the most terrifying thing I have ever done, but if it raises awareness and funds for Bridge2aid then it was worth it.’

Kalah was raising funds for the dental and development charity, ahead of her own visit to Tanzania in 2015. With 75% of the world’s population living without access to a dentist and millions living in pain with no hope of treatment, the Bridge2aid goal is clear; provide emergency dentistry and pain relief to those who need it most, and make a lasting change through training.

Kalah’s skydive has raised sponsorship in excess of £1,600 for the charity, with many significant contributions coming from the professionals in the dental community. Geistlich’s managing director, Frank Sellers has kindly offered additional sponsorship, bringing the figure upto a total of £2,300.

More information on Bridge2aid’s efforts to help oral health in the developing world is available here.

62d
|
Implant Dentistry
Dentistry Online uses cookies to give the best experience. If you continue to use our site, we will assume that you agree to the use of such cookies. Read More.
Accept