After successful non-surgical periodontal therapy, patients can often be left with healthy tissues but a less than perfect aesthetic result. Unfortunately, the nature of periodontal therapy means some of the gingival tissue will be lost to recession, the loss of the interdental papillae causing ‘black triangles’.

For some periodontal patients, this is a real problem leading to confidence issues. But, as an interim measure (to ensure periodontal healing and stability before any possible permanent cosmetic work is done) – or even for use as an alternative to extensive cosmetic work – a flexible gingival mask can be made to replace the lost gingival tissue.

A flexible gingival mask is a removable soft silicone appliance that is laboratory made and is formed for a relatively simple two-step impression technique.

This can also extend the useful life of functional crowns which are still serviceable but suffer from an unaesthetic appearance due to the gum recession.

A 44-year-old lady attended our clinic in January 2010. The patient disclosed she had been seeing an NHS dentist every six months for a number of years. The patient informed me she had never been offered hygienist or periodontal treatment and also had to request a scale and polish from her last dentist as otherwise she did not receive one. Her previous dentist had told her to use interdental brushes but never sized them for her and she had never received toothbrushing advice.

The patient was very embarrassed about her smile and did everything to avoid showing her teeth when she talks. She is a lecturer and she said the state of her teeth and gums affected her job. She was never comfortable with her mouth, she always had some pain and frequently got abscesses.

The patient was also a heavy smoker. I had an in-depth discussion with her regarding her periodontal status and informed her that the GDP had diagnosed chronic periodontitis and had asked me to collect data to formulate a treatment plan for her. I asked the patient to attend a further appointment for this.

I completed a 6ppd and recession chart completed. I noted that bleeding was evident in all pockets above 4mm. I also noted there was a substantial amount of subgingival deposits in all

pockets. I discussed non-surgical periodontal therapy in detail with the patient and smoking cessation advice was given. I advised the patient to also seek advice from her GP.

forms, including all costings for initial treatment.

Appointments 2 and 3: (90 minutes each and five days apart)

I recharted the 6ppd chart, recession, bleeding and mobility scores. An excellent result from non-surgical periodontal therapy. The patient confirmed she was very happy with the treatment she had received and felt a lot healthier in herself.

She also confirmed that she was using her TePe and vision brushes daily and there was little reformed deposit. A residual 5mm pocket UL6 mesial was noted and the patient was advised further treatment might be needed in this area. The patient told me she was extremely pleased that we had managed to save her natural teeth but was concerned about the aesthetics and told me her smile still affected how she preformed at work and wanted aesthetics improving before her son’s graduation in July 2010.

We discussed the possibility of cosmetic work in the future with her GDP and advised the patient to seek a consultation with him.

For this patient, the GDP discussed the options of cosmetic veneers and crowns after periodontal stability had been established but, as an interim measure, both the GDP and patient decided to go ahead with a flexible gingival mask to enable her to work confidentially until she was able to go ahead with cosmetic work.

My patient was made two sets of the silicone mask, to wear on alternate days, and was instructed how to clean it effectively. Advise your patient not use toothpaste, a toothbrush, or any denture cleaner or denture effervescent soaking product.

Any of the above can scratch the surface, bleach out the color, or cause the mask to harden. It should be washed in a mild dish washing agent and cleaned thoroughly each day.

It was also reinforced to the patient she must still perform her normal tooth brushing and interdental cleaning daily WITHOUT the mask in place.

Gemma Langford qualified as a dental hygienist in 2006 from the Liverpool School of Dental Hygiene. She is an extended duties hygienist working in a private practice in Southport, Merseyside, providing periodontal non-surgical therapy and periodontal maintanence. She was recently offered a place on the BSC dental studies degree at UCLAN which she will be starting in January 2012. She pens a blog called Passionate About Perio. Website: www.gumsareforlife.blogspot.com. 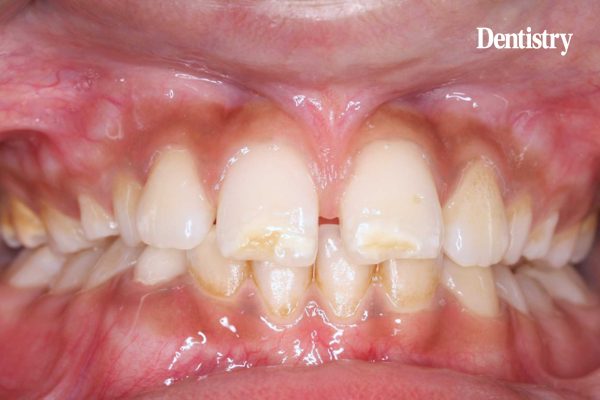 Brushing with Biomin F can relieve the dentine hypersensitivity of children suffering from MIH (molar incisor hypomineralisation). This is the…