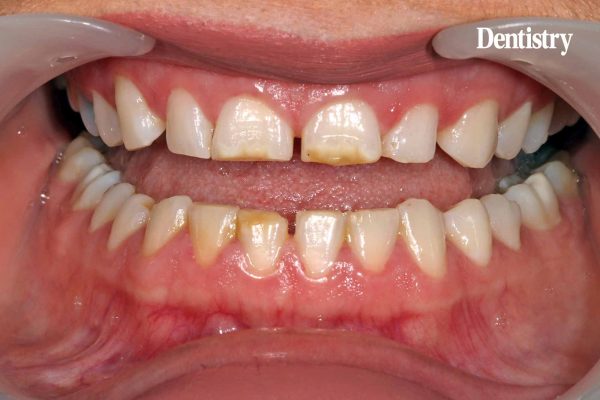 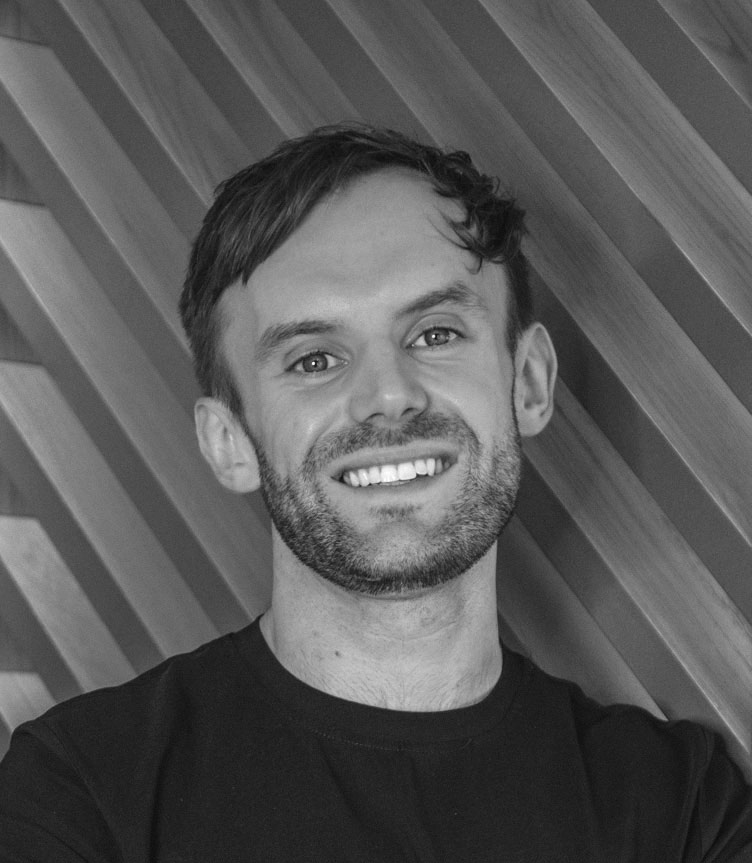 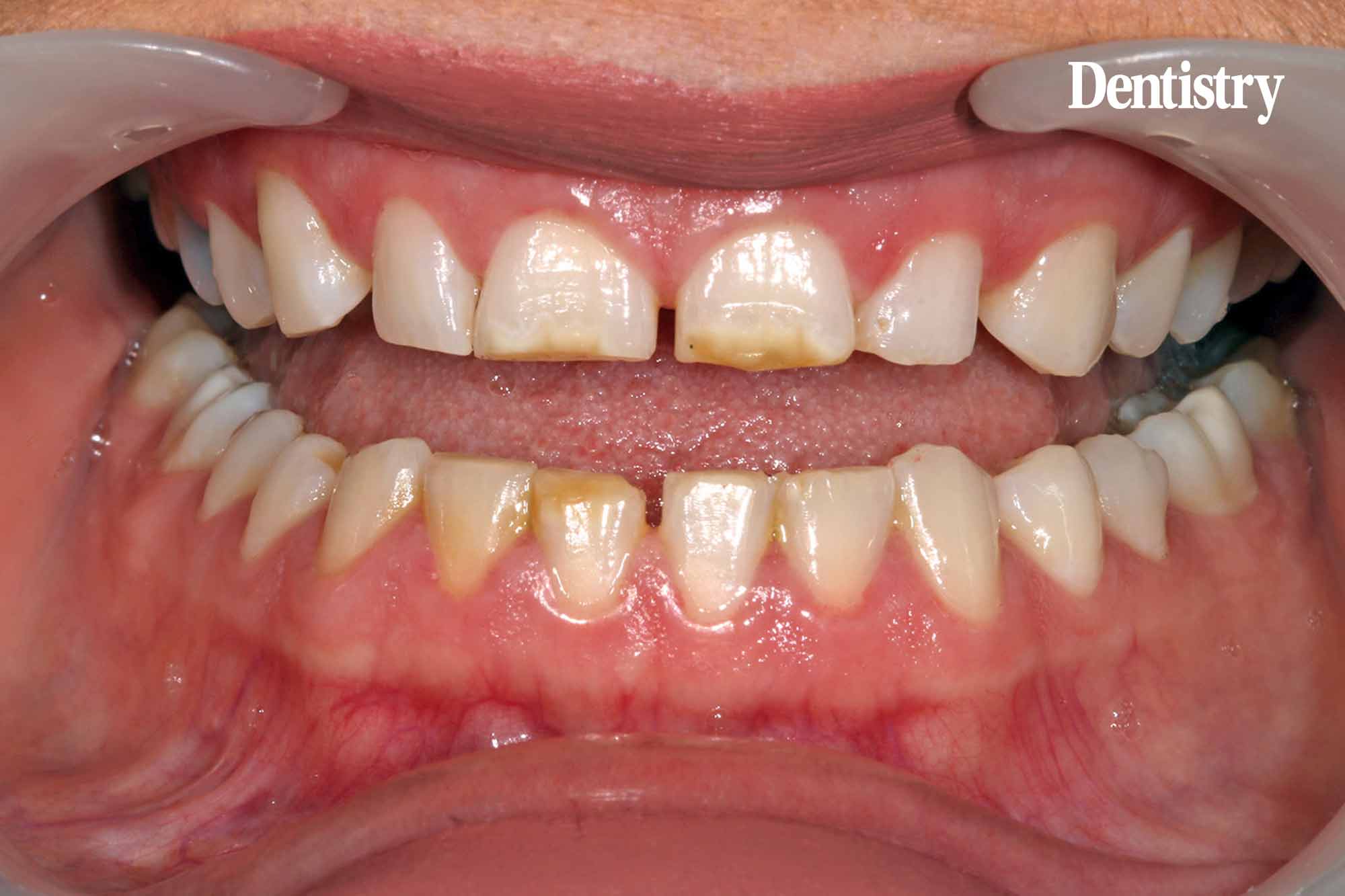 A 27-year-old female presented at Dental Excellence in Liverpool keen to have composite veneers. She wanted to do something about the brown staining on her teeth, which were also diminutive and gapped (Figure 1).

She was unhappy about the number of teeth she showed when smiling and wanted to achieve a bigger, broader smile.

The patient had suffered from premature extrinsic anterior tooth wear caused by historical consumption of carbonated, sugary drinks as a teenager (Figures 2-4), although, more recently, she had substantially cut down on her intake.

The clinical examination concluded the patient had good general dental and gingival health. Occlusal and orthodontic assessments revealed some loss of canine guidance (Figures 5-7). Loss of occlusal vertical dimension was recorded, resulting in a slight overclosure of the mouth. There were signs of enamel hypoplasia (Figures 8 and 9).

We discussed the option of porcelain restorations but the patient was slightly dental phobic and did not wish to have any treatment involving the use of a dental drill. Her teeth were already significantly worn down and, therefore, reductive preparation would not have been appropriate.

Orthodontics were not suitable either as her teeth were reasonably well positioned and this treatment path would not have achieved her goals of attaining a wider smile. We concluded that she was the perfect candidate for injection-mould direct composite resin veneers, as the technique is a purely additive process.

The initial stages of smile design are the result of close teamwork between the clinician and the Dental Excellence Laboratory, combined with the wizardry of modern digital dentistry.

Records were taken including a full set of photographs of the patient’s head and shoulders. A full-face video was recorded of her speaking and smiling. These were imported into the 3shape digital design software and then married up to a 3D digital scan taken with the 3shape Trios intraoral scanner. The patient was positioned with her eyes parallel with the ground. A 3D model was printed by the laboratory, to act as a guide later in the treatment programme. The patient was shown a putty stent to assess how her new smile would look.

The smile design approach is very patient centred. At this stage, she was encouraged to choose from several different shapes of teeth for the intended smile makeover. The mock-up was designed and placed in her mouth with methacrylate temporary material and photographs were taken of the trial smile (Figures 10 and 11). Using a mirror, the patient reviewed the smile before approving the design. Refinements to the design can be made at this point and excursions are checked. On this occasion, the patient was very happy to proceed without any alterations.

A one-hour hygiene appointment was made for a routine scale and polish prior to treatment starting.

The patient was then given a four-week course of home whitening (Style Italiano’s White Dental Beauty), and was instructed on an initial two-week application of daytime whitening, followed by two weeks of night-time treatment.

Gum recontouring had been planned at the mock-up appointment. This would help achieve the optimum aesthetic result, producing the ideal shape when combined with tooth lengthening later in the treatment process (Figures 12 and 13), and helping to achieve better proportions so that the patient could reveal more of the tooth when smiling.

With the trial smile mock-up in position acting as a ‘guided stent’, the biologic width of the gums was assessed by bone sounding. It was important to ensure the treatment would be targeted precisely. A 30-minute procedure using a diode laser was performed under local anaesthetic on the upper lateral and central incisors, to shape the gums in accordance with the new digital design.

The procedure took place two weeks before the first composite bonding appointment, allowing time for the gums to heal before the next stage of treatment.

At the first bonding appointment the patient’s upper dentition was treated, from UR5 to UL5.

Following gum recontouring, four clear injection-mould stents had been produced with Kulzer Memosil 2 containing holes for the insertion of the composite compule, for restoration of the upper and lower teeth. Memosil is a transparent, durable A-silicone prosthetic material enabling complete visual control. The material is odourless with no taste and flows easily under light pressure, due to its thixotropic properties.

The injection-mould technique was carried out on alternate teeth. The first clear stent contained the initial five teeth to be treated on the upper arch.

Prior to the injection-mould composite veneers being placed, minor tooth preparation was performed to minimise the appearance of brown spots caused by the hypomineralised enamel, with gentle application of aluminium oxide 53 micron powder using the Velopex Aquacut. The procedure also increases the bond strength for composite-bonded restorations.

The teeth were cleaned and polytetrafluoroethylene (PTFE) tape was used to isolate the adjacent teeth (Figures 14 and 15). A 37% phosphoric acid etch gel was placed for 30 seconds to roughen the enamel surfaces, followed by rinsing and drying. A universal self-etch bonding agent was then applied and light-cured.

The first stent was placed in the patient’s mouth and checked for good marginal adaptation.

It was my ‘go-to’ composite for this case, where the patient’s bite needed to be opened up to such an extent. I had to be confident that the material would be strong enough to support the change in her occlusion and the planned increases in tooth volume and length.

The composite was heated to 69oC in a dental heater. Using the stent as a guide, the composite was gently injected from the compule gun into the holes, aimed as close as possible to the gingival margins until the cavity in the matrix was almost full. The gun was slowly retracted while at the same time continuing to fill the space. This helps to ensure a smooth ‘flow in’ and ‘flow out’ method. Any extruded composite can be removed with a spoon excavator or flat plastic instrument. The teeth were then light-cured for 60 seconds.

The process was repeated for all five teeth in the first set, before the first stent was gently taken off. Sprues at the incisal edges of the teeth were removed in a three-step process. Sof-Lex polishing discs were applied with great care to ensure as much of the anatomy was preserved as possible.

Next, the PTFE tape was removed with a number 12 scalpel. Alternatively, a serrated metal strip can be used in a slow, deliberate fashion. Finally, excess composite was removed with the scalpel, taking care to avoid the gingival margin.

Polishing spirals and polishing points were then used to achieve a high lustre, respecting the tooth anatomy. In particular, the interproximal areas needed to be clean and shiny to help maintain good oral hygiene.

After a 10-minute break, work began on the alternate teeth. The five restored teeth from the first procedure were isolated with PTFE tape.

The teeth to be treated were etched and bonded and the entire protocol was repeated, working from right to left with the guide of the second stent containing all 10 teeth from the design (Figures 16 to 18).

The polishing protocol was repeated and the built-up teeth were cross-referenced with the mock-up to ensure the bite was respected and the absence of excess composite (Figures 19 and 20).

Canine guidance had already been built in to the original design. Checks were carried out to ensure the patient’s smile was in centric relation. Especially as she had previously been used to posturing her jaw forward as a result of the tooth wear.

Two weeks after the upper teeth were bonded, the patient returned for the lower composite bonding appointment (Figure 21).

At this stage, I checked the patient’s function in excursions. She confirmed she was happy with the smile achieved with the maxillary composite veneers.

Secondary polishing was also carried out at this appointment, and minor refinements and adjustments were made. Points were used for the final polish (Figure 22).

The patient has been kept under review and will be seen every six- to nine-months for hygiene maintenance and Airflow polishing.

She was given a hard-soft bite splint to wear on the upper arch at night. New trays were supplied for periodic whitening to maintain the bright white appearance of her new smile.

This case, for me, was a good exemplar of today’s ideal patient journey; the route from initial awareness via social media or recommendation from friends, the digital workflow, patient consultation and approval of the smile design try-in, the minimally invasive, purely additive approach of direct composite veneers, through to the highly predictable, aesthetic endpoint and patient satisfaction culminating in positive testimonials (Figure 23).

The young woman was ecstatic to see her final smile revealed. Although she had seen the trial smile at earlier stages in the treatment plan, she had not fully appreciated what could be achieved with composite veneers or the difference it would make (Figure 24). Her partner, who had been in the waiting room, was similarly excited when he saw the transformation!