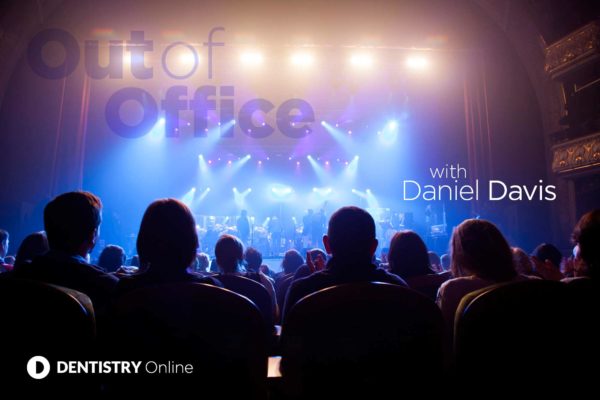 Daniel Davis, of J&S Davis, discusses his time in musical theatre and what it was like performing in stilettos.

My main activities are musical theatre, skiing – both of which have been curtailed in 2020 sadly – and walking, which we have done way more than normal.

Skiing is such fun and good for health. I have been skiing since I was a toddler – in the era of leather boots and wooden skis. Admittedly the food and drink that accompanies may well balance that out…

Focusing on the musical theatre. I have been doing that for over 20 years at the theatre in Radlett (Radlett Musical Theatre Company formerly Radlett Light Opera Society). We do two shows a year.

It used to be Gilbert and Sullivan every four shows with more current shows for the other three. The frequency was partly done as G&S were out of Royalty so could recover finances on losses made for the others.

I got into this due to my wife, Laura, who had been loyally coming to hear my parents and I sing choral works for years but never really liked them. She kept saying I should do musical theatre but I said that would be a much greater commitment.

So I got set up – she got talking to some mums from our kids’ infant school. As soon as one learned I was musical, she gave Laura the contact details of the society secretary. That evening I got home from work thinking I was going to have a quiet evening in. I discovered I was going for rehearsal and audition to be in the Mikado.

To be honest the audition was pretty much a given. A man, and under 50 at that, who could sing was a shoe-in. At that time, they never checked dancing capabilities which was just as well – I had none! Now, I wouldn’t get in as that is required.

It was a big shock though. The transition from performing static with a musical score and surrounded by my voice part (bass) to singing from memory whilst moving, dancing and not being anywhere near another bass was quite significant.

The fact I had done the Mikado at school age 12 was of some help albeit at that time I was one of the Three Little Maids (Pitti Sing)! Also, choral concerts are one night only. But for these shows, we are in the theatre from Sunday morning to Saturday night doing six performances (including one matinee).

I got quickly immersed though doing Oh What A Lovely War (as the only Francophile I did all the French-speaking parts), Yeoman of the Guard (my only solo part as the Colonel), Carousel, Jack the Ripper, Fiddler on the Roof, Matchgirls, Revenge of Sherlock Holmes, Crazy for you, Oliver, Children of Eden, Hello Dolly, Annie, Acorn Antiques The Musical (the year after Victoria Wood died), The Producers, Sound of Music, Barnum and many more.

The society also got one of the first licenses to do Cats. I know my limitations so helped front of house for that one. For Jack The Ripper I absolutely humiliated (if not traumatised) my then young kids by the sight of their dad dressed in women’s cloths (stilettos included) without any warning. For that section I was a policeman disguised as prostitute.

Socially, this is a fantastic hobby. You really get to know your fellow performers well and indeed the performances rely on excellent teamwork. It is great fun. It requires 150% concentration. You have to keep thinking ahead. Where is my next move? Next speech/song? What costume will I be wearing, what side of the stage do I enter and what is my cue? What prop do I need and when/where do I “lose” it again? Do I need to move furniture around?

So even if I have had a really stressful day at work, that is quickly forgotten. Then there is the singing – to sing lovely music in harmony with those around me accompanied by a 15-piece orchestra is simply exhilarating.

In March 2020 we were due to Fiddler on The Roof again. We had just done the final rehearsals when along came lockdown. So it was inevitably postponed repeatedly and now cancelled.

We did try to keep it alive on Zoom but gave that up. Anyone who has tried multiple voices at same time on Zoom will know it just doesn’t work. That type of singing is only possible if each voice is individually recorded and then someone stitches it all together days later.

So now I have serious withdrawal symptoms. But there is the prospect that probably later in 2021 we may be able to get together again to sing “normally”.

To give me something to do during lockdown, I decided to digitise the 500+ letters that my late father wrote to his parents whilst he was in RAF 1941-1946. This turned out to be an amazing project. I have now shared them with my family who are reading them and deriving much pleasure from them.

My late grandmother always said it is really important to have some interests outside work (and family) and she was right.