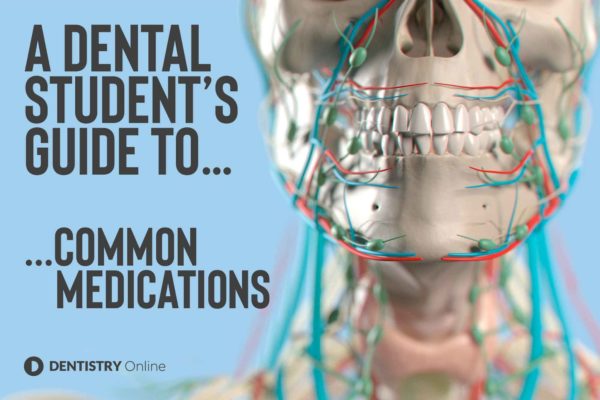 Hannah Hook and Frances Evelegh explore common medications, when patients might take them and warnings for dentists in this month’s dental student’s guide

As dental professionals a vital part of being a safe practitioner is having a good knowledge and understanding of the various medical conditions a patient may present with. Along with any medications they are taking and the impacts that this has on their dental treatment (Atkin and Rogers, 2014).

It is fairly common for a patient to present with a complex medical history. Whilst a long list of medication may seem daunting, knowing some common types of medications and what we use them for is a great starting point.

This article will aim to help build your general understanding about various commonly encountered medications. Along with their uses and any specific relevance to dental treatment.

Below will cover 10 commonly encountered classes of drugs patients may take when attending the dentist (Atkin and Rogers, 2014; Audi et al, 2018), along with:

What: decreases acid secretion in the stomach (Atkin and Rogers, 2014).

How: irreversibly blocks the gastric proton pump of parietal cells, reducing the production of stomach acid.

When: for patients with acid reflux, indigestion, peptic ulcer.

Warnings: if a patient has marked palatal erosion, which does not match with diet or habits consider getting them checked for acid reflux with their doctor. Long-term acid reflux is linked to Barrett’s oesophagus, a pre-cancerous condition.

How: competitive inhibition of an enzyme, which eventually results in the production of cholesterol. This stops cholesterol forming and consequently decreases the level of low-density lipoprotein cholesterol in the blood.

Warnings: avoid using statins with azole antifungals. This leads to an increase in skeletal muscle pain, cramps and damage (Atkin and Rogers, 2014).

How: they act directly on beta2 receptors, causing smooth muscle relaxation resulting in bronchodilation and vasodilation. They have a rapid onset of action, within 15 minutes, and their effects last for up to four hours.

When: people suffering from asthma or chronic obstructive pulmonary disease.

How: they inhibit reuptake of serotonin, increasing serotonin availability in the brain. This is thought to have a positive influence on mood, emotion and sleep.

When: SSRIs are the first line of treatment for people suffering from depression. They can also be prescribed for people with obsessive compulsive disorder, post-traumatic stress disorder and generalised anxiety disorder.

Warnings: SSRIs can cause dry mouth; clinicians should also place a focus on comprehensive OHI and fluoride therapy in these patients (Daly, 2016).

What: reduces the occurrence of seizures.

How: they inhibit the influx of sodium ions through cell membranes, slowing the rate of depolarisation and reducing cell excitability.

When: primarily to treat epilepsy but can we also use them to treat nerve pain such as trigeminal neuralgia.

Warnings: Phenytoin is known to cause gingival hyperplasia (Corrêa et al, 2011). You can manage this with impeccable oral hygiene practice.

How: reduces production of glucose by the liver and lowers intestinal absorption of glucose. It also improves the body’s sensitivity to insulin by increasing peripheral glucose uptake and use.

When: Metformin is the first line treatment for patients with type 2 diabetes

Warnings: the risk of developing periodontitis is two to three times higher in people with diabetes, therefore making sure patients understand the importance of good glycaemic control is key (Preshaw and Bissett, 2019).

How: Levothyroxine is a synthetic form of thyroxine (T4), a hormone produced by the thyroid gland. T4 is converted to T3 in the body. These hormones help to maintain brain function, temperature, metabolism and a multitude of other bodily functions.

When: patients with an underactive thyroid or after thyroid removal (Atkin and Rogers, 2014).

Warnings: thyroid disease is often autoimmune. So be aware of other possible autoimmune diseases in these patients, such as Sjogren’s and rheumatoid arthritis (Atkin and Rogers, 2014).

How: Warfarin targets an enzyme, vitamin K-epoxide reductase. As a result, this prevents the formation of the vitamin K-dependent clotting factors; II, VII, IX and X. Resulting in a slowed production of prothrombin and therefore an increased clotting time (Harter, Levine and Henderson, 2015).

When: anticoagulant therapy is recommended when a patient is at an increased risk of TIAs, strokes, heart attacks, DVTs or pulmonary embolisms.

Warnings: if a patient taking Warfarin requires extractions their INR must be below four and should be checked no more than 72 hours prior to treatment. Keep treatments as atraumatic as possible. Use appropriate local measures, for example a haemostatic packing material and sutures.

Avoid prescription of medications such as Metronidazole and azole antifungals as they increase the INR and the risk of internal bleeding.

Advise patients to take paracetamol for pain relief unless contraindicated as NSAIDs can increase bleeding risk.

What: reduces the ability of blood clots to form.

When: antiplatelets are usually given to patients who have previously had a myocardial infarction to help prevent another one occurring. They may also be prescribed in patients that have experienced a stroke or have a stent fitted or in patients diagnosed with peripheral vascular disease.

Warnings: patients on dual antiplatelet (most commonly Aspirin and Clopidogrel) therapies may have a higher risk of prolonged bleeding compared to those on a single antiplatelet drug and should be managed accordingly. Treat patients without interruption to their antiplatelet medication. Stopping antiplatelets prior to a surgical procedure may increase the risk of a thrombo-embolic event.

Implement local haemostatic measures as with anticoagulants. NSAIDs increase bleeding risk, therefore do not advise as a post-op analgesic.

Do not prescribe drugs such as Erythromycin, Clarithromycin, Carbamazepine and Fluconazole to these patients as they may increase bleeding risk.

What: slows down bone loss.

When: prescribed to patients with osteoporosis or osteopenia.

Warnings: Assess the risk level of medication related osteonecrosis of the jaw (MRONJ) for each patient taking bisphosphonates or RANK-L inhibitors.

For those patients that are of higher risk, explore all alternative treatment options to extraction and simple extractions in primary care should be that last resort.

49d
|
Young Dentist
Dentistry Online uses cookies to give the best experience. If you continue to use our site, we will assume that you agree to the use of such cookies. Read More.
Accept