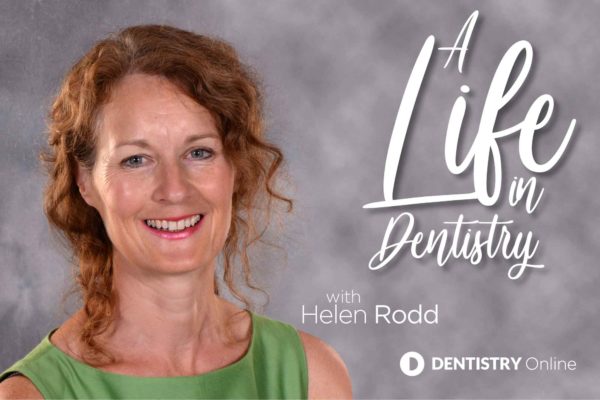 After receiving an MBE, we speak to Helen Rodd about her life in dentistry and her views on the current state of children’s oral health.

Helen Rodd: My name is Helen Rodd. I am a professor and honorary consultant in paediatric dentistry at The School of Clinical Dentistry in Sheffield.

Why did you first get into dentistry?

Helen Rodd: Back in the early 80s, when I was at school (‘old-style’ public girls grammar school in Lincolnshire), careers advice was pretty much non-existant.

I loved the arts and writing. So I might have drifted into doing an English or History degree, had it not been for my pottery teacher, Peter Plant. One day, when I was in the pottery studio, he says: ‘You are good with your hands, and good academically, why don’t you do dentistry?.’

I spent a couple of afternoons on work experience with my dentist and that was it. Off to Bristol University I went, back in 1984.

After qualifying, I spent the first two years in various hospital posts, doing one in two on call maxillofacial jobs. I was wondering if I had actually made the right career choice.

Luckily a ‘random’ paediatric dentistry lecturer’s post came up in Sheffield; with the opportunity to do specialist training and a doctorate at the same time. I have not looked back!

One of your first publications focused on the requirement of local anaesthetic for the restoration of primary teeth. Why was this an area you wanted to focus on?

Helen Rodd: When I started as a lecturer in Sheffield, I did not have any research experience. The very strong oral neuroscience research group, with Professor Peter P Robinson and Professor Fiona Boissonade leading it, took me under its wing.

This group had an international reputation for research into trigeminal nerve injuries and neuropathic pain.

As a paediatric dentist I was interested in knowing whether primary teeth responded differently to caries than permanent teeth. There seemed to be an impression that they were less sensitive to pain and were not able to mount the same reparative responses following injury.

So I spent the next six years looking down a fluorescent microscope at tooth pulps from extracted primary and permanent teeth. Quantifying neural, vascular and immune responses to caries.

The take-home message was that primary teeth are well innervated. With the same nociceptive receptors as permanent teeth. The concept that we don’t need local anaesthetic for restorations in primary teeth is completely unfounded from a biological perspective.

After starting your research in basic science, why did you move into more child-centred research?

Helen Rodd: I really enjoyed the lab-based neuroscience research. But I recognised that further funding to find a clinical application for my research was unlikely to happen.

After my PhD I returned to full-time clinical work and felt myself drawn to more patient-centred research.

At that time a new multidisciplinary research group was expanding in Sheffield, under the leadership of Professor Peter G Robinson (uncanny how there were two Peter Robinsons in my research career!).

This group brought together the social sciences (psychology and sociology) with clinical dentistry. I found this approach was more relevant to my day-to-day clinical practice.

Also, I became great friends with Professor Zoe Marshman, whose specialty is dental public health but with an emphasis on child health. We have been part of a movement that is more inclusive of children in research.

And, to be honest, it is a lot more fun than pipetting out solutions in the lab.

During your career how has children’s oral health and the approach to their oral health changed?

Helen Rodd: Over the 30 years I have been a paediatric dentist, I have great sadness that I am not seeing fewer caries.

The number of referrals for young children requiring multiple extractions under general anaesthetic is absolutely overwhelming. We do around 2,000 cases a year in Sheffield alone.

So, within my own practice (and of course, I don’t see a representative sample) I can’t say I have seen a great improvement in children’s caries experience.

On a more positive note, when we see children with restorable caries, we are so much more conservative now. We take a much more biological approach.

The introduction of the non-invasive Hall technique for placement of preformed metal crowns has revolutionised our approach to one of ‘sealing’ in caries rather than cutting it out.

Another huge change is the number of children that we now see with molar incisor hypomineralistion (MIH) with first permanent molars of poor prognosis and unaesthetic opacities on permanent incisors.

But managing children with MIH does highlight a key way in which our approach to treatment has changed over the years; we are much more aware of the psychosocial impacts of dental conditions.

Paediatric dentists have always been skilled at communicating with children of all ages and abilities. But I feel that in recent years, we have involved them more actively in decision-making about their own health and treatment choices.

We have also engaged children more meaningfully in oral research. Giving them opportunities to be active participants. Shaping the research questions and study design so that the research actually has relevance to children themselves.

How do you think we can stop so many children undergoing general anaesthetic to have their teeth removed?

Helen Rodd: The simple answer is to fluoridate our water, reduce sugar-intake (especially in soft drink consumption) and encourage regular dental attendance from an early age.

Many children arrive at our clinic with unrestorable teeth. So extractions are the only option.

We need to find ways of seeing and treating these children earlier.

How do we narrow the oral health divide between those from different backgrounds?

Helen Rodd: There are huge social inequalities in children’s oral health in this country.

Children from deprived backgrounds, particularly in the north west of England, Yorkshire and the Humber have significantly poorer oral health than children in more affluent southern counties.

For example, in the worst areas, 34% of five-year-olds have caries. Compared with only 14% in wealthier areas.

One way of reducing this health divide has to be prioritising resources to the populations that need it most. Such as supporting supervised tooth-brushing schemes, fluoride varnish schemes and increasing salaried dental services and making them more accessible to these vulnerable groups.

For those starting on their dental career now, what advice would you give to them?

Helen Rodd: Spend some time finding out which bits of dentistry you like the best. Incorporate them in your career choice.

I nearly gave up dentistry early on to do a law degree. I liked critical thinking and writing. But luckily I found that a clinical academic career included these aspects.

Also, it is so important to find mentors and enthusiasts who will support you along the way. Then you will find yourself wanting to mentor and support others in return, which is so rewarding.

And, when it all seems a bit much, go for a run, do some yoga or have a large slice of cake. Congratulations on receiving an MBE. How did you find out?

Helen Rodd: Back in May, I had a strange phone call from someone at the Cabinet Office asking for my email.

After asking what it was about, the caller was evasive, saying I was getting a letter. So reluctantly I gave them my email address.

A few days later I was out running in the hills and I stopped to take a photo. I looked at my emails (which I never ever normally do). There was one from the Cabinet Office, saying I was getting an MBE for services to children and NHS leadership. It left me stunned.

I had no idea that somebody was recommending me for an honour.

The letter said I had to keep it a complete secret, for an undefined period of time (due to the pandemic). To be honest, I deserve a medal for keeping it secret for six months!

The week before the embargo, I could speak to my professional organisations to prepare press releases; that is when I found out that the British Society of Paediatric Dentistry submitted the recommendation and citation.

I am so hugely grateful and humbled that they should think so highly of me.

The lovely messages from people all over the world is overwhelming. My family are overjoyed. My 83-year-old dad actually said he was looking forward to his root canal appointment so he could boast about me to his dentist.

There are no plans for a palace visit anytime soon, due to the current COVID situation. But fingers crossed I actually get to dress up for a ‘do’ one day.

Paul Mendlesohn, whose funeral took place last week, was a dentist and entrepreneur who founded the Whitecross chain, revolutionising high…