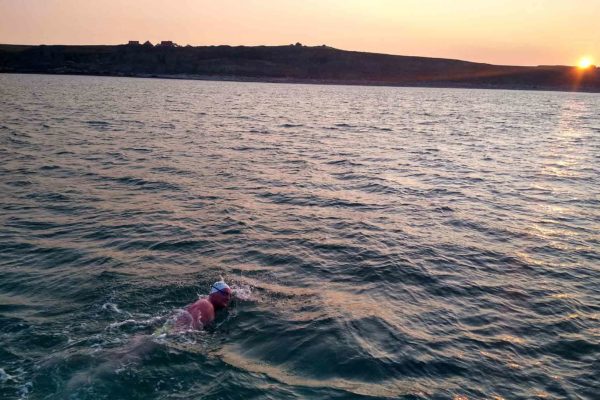 A dentist who braved a solo swim across the English Channel raised almost £7,000 for a dental charity.

Jim Lafferty took on the 21-mile challenge on Sunday, 13th September after receiving a call that weather conditions were right for the swim.

Joined by his support team and boat High Hopes, he set off at 7.30pm – arriving 11 hours and 53 minutes later at a beach near Calais, France.

‘I’d only ever swam for six hours before so I was very nervous before setting off,’ he said.

‘The sea temperature was about 18 degrees which was okay. But in the first hour I faced the roughest seas I’d ever swam in. It was very choppy and I swallowed a lot of salt water.’

He added: ‘It soon became more of a mental challenge than a physical one. I did consider getting out after three hours but I knew there was nothing wrong with me and I had to keep going.’ Jim – who works as a dentolegal consultant for Dental Protection and at Orgreave Dental Surgery in Sheffield – stopped every 45 minutes to drink water and eat, all while treading water. And about 30 minutes from the finishing line, he was stung on the face by a jellyfish.

‘I was pretty wobbly as I got out,’ he said.

‘I’d been pulled so far by the currents that I missed Cap Gris-Nez. This is the closest point to England. Inded up on a tiny beach where I was greeted by a French couple who’d been tracking my progress.’

He added: ‘I’m quietly proud. My brother Ben is a proper swimmer – he reached the finals of the Commonwealth Games. Having him on the boat as part of my team really kept me going.’

So far, Jim has raised more than £6,900 for Dentaid in a bid to help the charity restart its work.

You can sponsor Jim’s swim here.