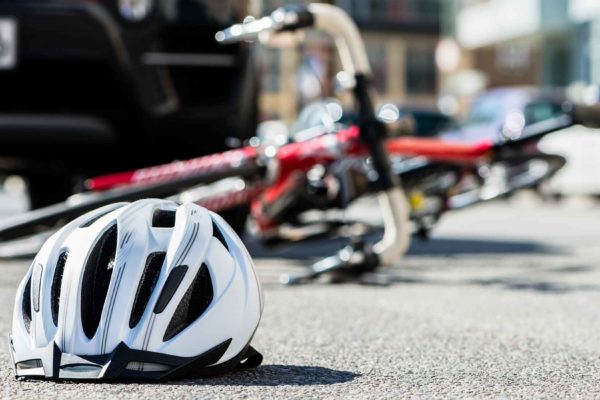 Dominic O’Hooley explains how he almost lost his right arm after a bike accident on the way into practice.

A Friday morning like any other. Pulling on a gaudy cycling jersey over my bib-shorts, orange with a chevron pattern in monochrome. Rebecca (my wife) commenting: ‘Well, at least it is bright…’. Mug of tea in hand, slight smile on her lips, perhaps a more troubled look in her eyes.

Last memories of Appleton Academy, modern interpretation of a secondary school, all curves and larch cladding, shooting past on my right as I work those pedals, through Wyke and on my way to Brighouse; my next mental way-stop on this journey to Huddersfield. Long sweeping downhill to ‘Hellfire Corner’, accident blackspot and where the black curtain comes down on my memories for four days.

I don’t turn up at the practice. Bleeding out at the side of the road instead. Right forearm degloved with crazy paving beneath the flayed muscles, my bones, in new and interesting shapes. The helicopter lands in a field below my road-borne blood trail, an organic SOS sign painted there to guide them in. The on-board emergency medicine consultant removes my helmet. Flat at the front but not split. Possibly a good sign.

They give me ketamine to stop my screaming.

A policeman comes to see Rebecca. She tells me later on, much later on, that she has been expecting a visit for years. Uniformed grim reaper knocking on the door, hushed tones: ‘Can I come in please?’ Well, I am not dead. It seems likely I will be losing an appendage though. He takes her down to see me in Leeds major trauma centre.

Four operations in a week. The same company that made my implants (Biomet) makes my newly plated arms. They place the same material I use to regenerate bone (tricalcium phosphate) into my left wrist. It replaces the bits I left on the road. I howl like a hydrophobic dog as the pain consumes me. Rocking back and forth, dancing with my agony, on atypical antipsychotic drugs to deal with my severe head injury-based agitation (that helmet wasn’t such a good sign after all, as I have air in my anterior cranial vault from an orbito-ethmoidal fracture, two bleeds within my brain, diffuse axonal injuries and an unstable broken spine).

I leave the hospital after two weeks. My second neurophysiology examination suggests that I am now not a danger to myself.

Life out of the hospital

Rebecca has to feed me, shower me, brush my teeth. I somehow manage to go to the toilet on my own, a little dignity remaining as I become a helpless child again. I walk round the block with her and try to hide my utter despair, breathless and frightened of tripping over, falling on my ruined arms. But I wake in the early hours every day, terror behind my eyes and neuropathic pain shooting through the fingers of my numb left hand, the median nerve, crushed and affected by hypoxic damage from the ballistic compound fractures. Is it telling me that it is trying to come back?

The thought of returning to dentistry seems so ridiculous to me. I have no feeling at all in three of my digits, including my thumb. Sinistrality defining my previous existence, I had learned the dental craft two-handed, ambidextrous and smug that I could switch hands to suit the tooth. I now vaguely wondered how I could manage as a pseudo-right hander, phantom limb lolling useless at my side. Clearly, I couldn’t inflict that on patients.

I recall starting at Liverpool Dental School and lecturers telling me that the left-handed chair was out of action. Would I be willing to try it right-handed? I had been so glad that I did, but now it seemed like a cruel additional joke.

About a week after I returned home from hospital, one of my practices called to see how I was but also to get a handle on when I might return. I told them that it seemed entirely impossible to predict if or when I could ever be a dentist again. They said they would have to recruit as their investment to allow implant provision had been prohibitive without any income generation.

I partly understood this and said that although I found that hard to bear, I would not stand in their way. My memory of immediately after this call is disquieting to me now. I felt like jumping under a bus. I still struggle to see the humanity in the timing of that call. But in some ways I reflect that the actions of the few (you know who you are), were quashed and rubbed under foot into the dirt by the compassion and selflessness of the many.

Whilst I was still in hospital, my close friend Jason organised with my practices for some more of my pals – guys with lots of implant experience – to spend days finishing my cases. All at no cost. Kris, Andy, Chris, Jason and Adam, you five will be forever in my heart. In addition, two dental labs finished the work for no fees, Phil and Steve. You have joined them there.

Two lovely guys set up a just giving page for me when it became clear that my income protection didn’t cover cycling accidents. Ken and Dean went to Spain to walk for me. They are heroes as are all the generous folks contributing financially and who kept the wolves from the door as the months piled up.

It became clear after a few weeks at home, that I was damaged goods. Not only physically but mentally too. Atypical PTSD manifested itself with panic attacks, feelings of utter desperate futility matched with daily sobbing. Often I would collapse on the floor as my legs gave out on me and the tears wouldn’t end.

It is only due to Rebecca that I started the long rebirth to a place where I can now look back, two years from that time, and actually smile at the memories both good and oh so bad. Rebecca has the rare gift of knowing how to get through to an autistic man, bedevilled with self-pity, and seemingly happiest lying on his bed, hiding from the world. I am the luckiest man alive to have her as my wife.

Only the extremes of physical pain matches the mental torment in those early months. As my damaged nerve regenerated, I had neuropathic stabbing sensations up through my fingers almost all the time. I would often shout out when they happened unexpectedly. But I knew somewhere in my mind that this type of pain was a good thing. A sign of recovery.

Another key part of my recovery was the trauma physiotherapy and occupational therapy team at Leeds General Infirmary. These lovely people had to hurt me to heal me. The forced bending of my rigid left wrist still makes me feel nauseous. But they knew how to keep my focus, setting me challenges such as the Purdue peg-board dexterity test – a fiendish set of tiny metal pieces that I would slot into tiny holes whilst timed. I knew that this was originally part of the American astronaut selection, and this spurred me on to get better, to make fewer mistakes and to bring my time down. For so long, I couldn’t complete the test, but eventually I did.

The road back to dentistry

A kind lady called Kate lent me an implant motor and some plastic jaw sections, so I could practice osteotomies and placing implants at home. The first one I did, I took photos and posted it with more pride than any case I have ever displayed. I decided that as I could do that, if only my numbness would completely go, I would consider returning to clinical dentistry.

And so, about eight months after the crash, Rebecca took me down to Adel, for I was still unable to drive despite sign off from neurology. Kris had been ably looking after my patients and I think that despite everyone being so delighted to see me, perhaps there was a tinge of regret that the cheeky chap was no more, replaced by serious Dominic, the odd’un.

I told myself that I would place better than ever. I instructed myself that is what I would do. From somewhere, my will had returned. Whether it was walking 10k every day, over the local trails, or being absolutely exact with my surgeries, this is what I was going to do.

I never went back to that practice. Instead I joined a lovely one in Ilkley with one of my closest friends. And so, there were three again.

I sold my handmade steel fixed wheel bicycle and made a promise that I would never cycle ever again. Even if my arms and fear would let me.

And I started running again realising what I had been missing. I embraced the trails and trained with our dog, Esther. Finding joy again after I thought it had gone forever.

I would love to tell you that I embrace every day like it is my last. I don’t. And I still feel the anxiety much of the time, but I realise it is just my brain messing with me.

I started looking forward to tomorrow. I try to think less about the past.