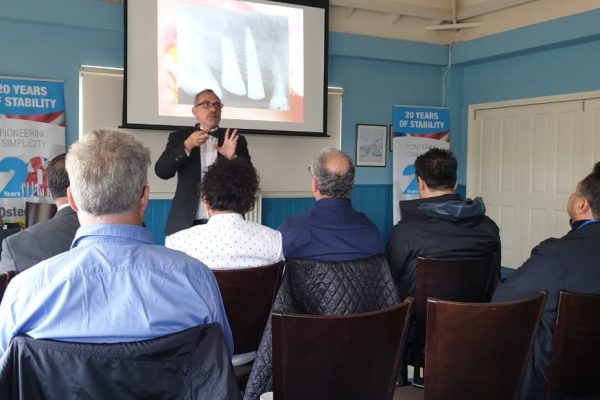 For an occasion like a 20th anniversary, one should do something memorable, and Osteocare certainly did.

This seminar covered everything to do with digital dentistry and was Dr Martin Attariani kicked things off. Dr Attariani qualified in Sweden as a biochemist. He then moved into dentistry in 2005 and in 2007 bought and now runs a full-private practice in Leamington Spa. Dr Attariani started by dedicating the lecture to his friend – the late Doctor Anoop Maini. He then spoke about digital implant dentistry.

Dr Attariani likes his gadgets, which includes a CEREC (Chairside Economic Restorations of Esthetic Ceramics), microscope, CBCT, 3D printer among other items. He reminded attenders that without a CBCT there is a lot of guesswork trying to estimate how much bone there is for an implant. Dr Attariani went digital purely for the patient experience. He knows patients may smile but they hate attending the practice. And so he set about using digital devices to improve the patient experience. The patient experience is improved dramatically with intraoral scanning rather than traditional impressions. Risk of errors also reduces. CEREC offers same-day restorations, which is great for the patient.

Finally, Martin took the time to talk through words and phrases used in digital dentistry for those new to the field. He showed great cases of implant placement and restorations to the attenders.

Professor Amr Zahran was next up. He presented on increasing bone volume in implant placement. Professor Zahran discussed the need for GBR, the effects of one-piece implants for immediate loading and the fail rates of implants placed where there is simply not bone. Indeed, Professor Zahran has much experience in this area having conducted studies for decades.

Dr Sumair Khan, last speaker for the day, said there is no implantology without periodontology (NIWOP). His lecture offered a detailed summary of the clinical research into the links between periodontology and implant dentistry. He concluded that it is vitally important for the implant dentist to be aware of a patient’s periodontal status before surgery and to have any periodontitis under control.

Osteocare business development manager, Carly Harwood, said: ‘The professor (Amr Zahran) has been fundamental in the design of Osteocare implants. It was an honour for him to talk at our 20-year celebrations. And the Brooklands Museum was the perfect place to celebrate our anniversary. It is the birthplace of British motorsport and aviation, which ties into Osteocare’s heritage. Our engineers are always aiming to make implant placement easier for users and our dedicated researchers constantly develop new ideas to increase osseointegration.’

During afternoon tea, Osteocare director, Celine Gauld, gave a heartfelt speech to mark the firm’s 20-year success in the implantology market. She talked about the history of Osteocare and its British heritage.

Osteocare is the only British made and designed implant company. Indeed, Brookland’s Museum, the birthplace of British motorsport and aviation, was the right place to celebrate 20 years of implants.