‘The best of both worlds’ 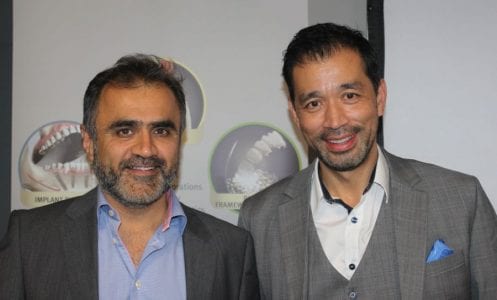 ‘The best of both worlds’

Philip Hayter and Sanjay Chopra explain what led them to join their thriving referral practice with Dentex.

With no imminent plans, it seemed a surprise for Sanjay Chopra and Philip Hayter to sell their practice.

The two specialist oral surgeons established Highland View 25 years ago as a referral practice in Leigh-on-Sea and Hornchurch – and yet earlier this year, it joined the growing ranks of Dentex.

‘The environment was changing,’ explains Phil. ‘The increasing pressure of compliance and the running of two practices were eating into more of our time. They weren’t affecting our clinical practice – yet – but we had less time to juggle everything.’

Sanjay continues: ‘We actually wanted to protect our clinical practice: we did some research and gradually developed the realisation that selling a practice wasn’t just something to do when you were coming up to retirement. The idea that you could sell a practice to enhance your clinical dentistry was a bit of a revelation.

With the pair still enjoying their clinical dentistry, retiring was not an option. Both dentists wanted time to pursue a better work/life balance and let someone else take on ‘the burden of expansion or bringing successors in’.

Sanjay freely admits that they ‘wanted the best of both worlds’.

He laughs: ‘We wanted someone else to take on some of the headache, yet at the same time we didn’t want to be told what to do and lose control.

‘To a degree, we were planning for when we started to cut back, whether that was five or more years into the future.

‘We wanted to make that plan while we were at our peak, rather than waiting until we’d had enough and were desperate to sell – that’s when you get a compromised sale.’

Several businesses were interested in the practice, who the pair admit they have ‘great respect for’. One company’s unique approach to dentistry stood out, however.

‘Working with Dentex was pitched more as a partnership than a takeover,’ explains Phil.

‘And that’s exactly what we’ve experienced. More than anything we wanted a support structure to grow and maintain the practice, but not one that would take anything away clinically. We want to enhance that side if anything.’

And Dentex has been as good as its word.

The sale went through smoothly, thanks in no small part to the hard work from David Gurney and Amanda Smith, the two practice managers whose efforts through the due diligence process meant that progress, though intense, was rapid.

And now, the pair feel the practice is reaping the benefits.

Phil explains: ‘We ran a tight ship in the first place; we’d invested heavily in making sure we had proper systems in place for compliance and running the practice, but everything feels even more organised now. It’s taken the practice to another level.’

What’s more the team are happy too: not a single member of staff has left since the plans were revealed and for all eight associates it’s been business as usual.

‘Everyone has been absolutely happy,’ says Sanjay. ‘Which for us speaks volumes.’

There are no regrets. If anything, both partners seem energised and upbeat about the future – and very happy with their decision.

Sanjay adds: ‘To be honest, taking away the hassle of the admin has reignited our interest in our dentistry.’

‘We’re clinicians who turned our hands to running practices,’ says Phil. ‘We now feel we’ve got a lot more support in the areas that we weren’t full experts in.’

There’s a sense that both sides are learning from each other as the relationship beds in. That’s not stopping the pair ‘actively seeking’ new practices to join the fold though.

‘We’re putting our own reputation on the line if we’re recommending Dentex as a group,’ explains Phil. ‘But we’re confident other practices who join will experience the same benefits as we have.’

Practice owners interested in speaking to Sanjay and Phil about their experience with Dentex can contact them through the practice, Highland View.

To find out more about partnering with Dentex, email or visit the website.

Kirsty Hague looks at how practices are using unique and original design ideas on Pinterest to attract new patients. As…

18hr
|
Private Practice
Dentistry Online uses cookies to give the best experience. If you continue to use our site, we will assume that you agree to the use of such cookies. Read More.
Accept