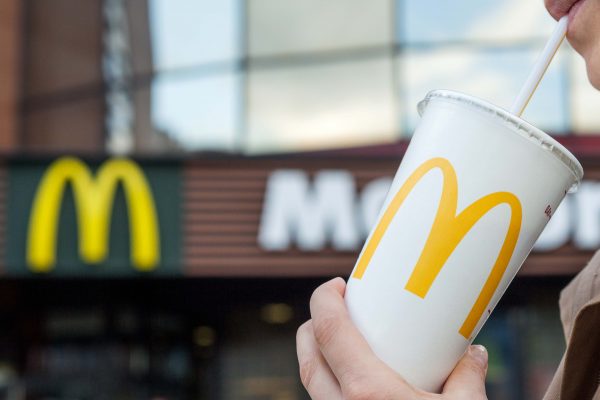 McDonald’s is receiving opposition to plans to open a 24-hour restaurant and drive-through 200 metres away from a school.

A school head teacher is among the more than 90 people objecting to the new fast-food restaurant in Cardiff.

Concerns have been raised over unhealthy food and smells, as well as increased traffic in the local area.

‘The proposal to establish a McDonald’s so close to the school is a significant concern,’ Kevin Hart, head teacher, told Cardiff council.

‘Particularly as there is already a fish and chip takeaway in Llanishen village.

‘Furthermore, I am very concerned that agreeing to a fast-food establishment on a residential estate may well lead to an increase in anti-social behaviour in the evenings.’

In a statement to the council, McDonald’s said it was committed to supporting customers make healthy dietary choices.

It claims it is reducing the fats and sugars in its products and broadening its menu.

In June McDonald’s announced a ‘revamped’ salad and wrap range to offer a meal for under 400 or 600 calories.

‘The salads will feature as part of McDonald’s Meals Under offering, making it even easier for customers to make informed choices when eating out,’ the company announced in June.

‘”Meals Under” allows customers to build meals featuring a main, side and drink, which achieves either green or amber on the Food Standard Agency traffic light system for fat, saturated fat, salt and sugar and are under either 400 or 600 calories.’

Its research shows that there are up to five times more fast food outlets in poorer communities compared with more affluent areas.

PHE has accused these outlets of exposing children to fast food with little or no nutritional information, making it more difficult to choose healthier options.

‘It’s not surprising some children find it difficult to resist the lure of fast food outlets when many neighbourhoods are saturated with them,’ Dr Alison Tedstone, chief nutritionist at Public Health England, said.

‘Local authorities have the power to help shape our environment and support people in making healthier choices.

‘They need to question whether these fast food hotspots are compatible with their work to help families and young children live healthier lives.’

22hr
|
Oral Health
Dentistry Online uses cookies to give the best experience. If you continue to use our site, we will assume that you agree to the use of such cookies. Read More.
Accept