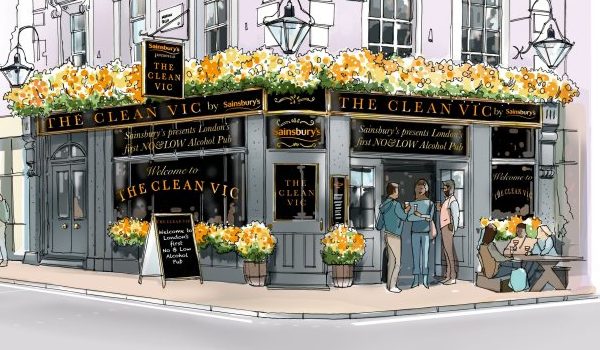 Sainsbury’s will be launching a pop-up pub in London this summer that will serve no or low alcohol drinks.

Entry will cost £5 and includes two drinks and bar snacks.

‘We’re seeing a really exciting spike in the no and low alcohol category,’ Anne Cooper, buyer at Sainsbury’s, said.

‘Those who want to hold off on alcoholic beverages don’t need to miss out on the experience of enjoying a beer with friends or even a mocktail made with a delicious non-alcoholic distillate.’

Turning their back on alcohol is becoming mainstream among many young people, reports show.

It also showed that young people who did consume alcohol were also drinking less too.

‘The decline in drinking could be due to increasing health awareness among young people and people making healthier lifestyle choices,’ the NHS says.

‘From a public health point of view, this is probably good news, not least because the numbers of young people engaging in harmful binge drinking is also in decline.

‘Despite the drop, 28% of young people still reported drinking above recommended levels on at least one day a week.

‘The lack of change in drinking habits among young people who smoked was also notable.

‘There are still issues to address and people who may benefit from more support to reduce their alcohol intake.’

Middle-aged drinkers are being encouraged to introduce regular ‘drink-free’ days with a new campaign from Public Health England (PHE).

A Yougov poll found two-thirds of middle-aged drinkers find it harder to cut back on alcohol than eat healthily or exercise.

Those aged 45-65 are the most likely to drink more than the recommended 14 units of alcohol per week.

‘Having a day off drinking gives you a chance to clean your system and give your liver a rest,’ Dr Julia Verne, a spokeswoman on liver disease for Public Health England, said.

‘It also has an immediate impact on your sleep and calorie consumption.

‘People have also told us that the idea of a “drink-free” day is much easier to manage than cutting down.’