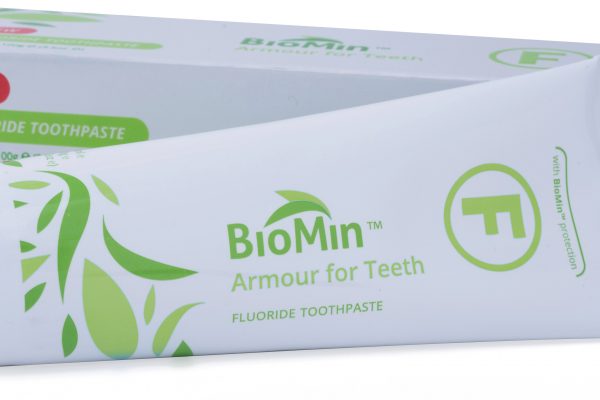 Biomin F toothpaste, based on bioactive glass technology, has been available for several months now. Moira Crawford talks to clinicians with over a year’s experience of Biomin, who say 90% of patients are reporting relief from sensitivity problems.

Dentine sensitivity is a big deal for patients. Discomfort or pain, particularly in reaction to hot or cold food and drinks, or even cold air, is common in the general population, and can cause acute distress, having a genuine impact on people’s lives.

Sufferers come to their dentist seeking relief from the pain of hypersensitivity and, as a result, there is a wide range of toothpastes aimed at patients with sensitivity available on the market. Many patients have tried them all, with varying degrees of success.

‘There isn’t one single cause of sensitivity, so there can’t be a single product that is the gold standard,’ explained Dr David Gillam, who chaired the forum. ‘It’s like Cinderella’s slipper – one size does not fit all.’

Following a discussion between Dr Gillam with Professor Robert Hill, research director at the Dental Institute and head of dental physical sciences at Queen Mary University of London, about the available products developed to treat dentine hypersensitivity, they decided to collaborate to look for a more effective approach.

Professor Hill’s area of interest is the potential uses of bioactive glass (glass materials that will dissolve in aqueous environment to form apatite), and together they have developed a revolutionary new type of toothpaste, which delivers calcium, phosphate and fluoride ions in a slow release format and which is having dramatic results in the management of dentine hypersensitivity – Biomin F. On the basis of their fluoride bioactive glass patent a university spin-off company was formed, Biomin Technologies, which is now marketing Biomin F and continuing to research ways in which this bioactive glass technology can be applied.

Now that Biomin F has been commercially available for nearly two years, the body of information regarding its effectiveness is building up. A number of dentists and hygienists have been recommending the product to their patients with sensitivity, and even using it themselves – and finding that it works.

Dr Don Gibson, a dentist in Yeovil, read about Biomin in the scientific press and was immediately interested in the science behind it, and felt it made sense. ‘I liked the slow release principle, and the chemistry was appealing: laying down the apatite makes sense to a dentist,’ he said. ‘This is a principle that all dentists should realise is going down the right road.’

London dentist, Dr Rash Patel, read the information and was impressed by the science behind it, the bioactive glass, and the slow release concept, as well as the physical barrier provided by the toothpaste. He was particularly attracted by the idea that it avoided the need for a ‘blast’ of high concentration fluoride.

‘The binding property appeals to me, and that the effect is reinforced by cleaning every 12 hours,’ he said. His own informal research among his patients shows that the ‘overwhelming majority’ – over 90% – got benefit from using Biomin. He gave free samples to patients with sensitivity who had tried other products without success, and they were sold on it. ‘As a clinician I make a judgement on what I see works.

‘It is not the amount of fluoride that counts but the length of time it is in contact with the tooth, and Biomin is attached to the surface and enters the tubules to form a protective layer,’ he said. ‘This is especially important with patients who, for example, consume a lot of Diet Coke during the day.’

‘They are on to something with this product,’ agreed Dr James Durie, a general dental practitioner in Hampton, Middlesex. ‘It really has merit.’ Dr Durie is seeing a lot of sensitivity arising from dental erosion among his patients, frequently associated with reflux, mild gastritis, and multiple medications.

Having been introduced to Biomin F, he started recommending it to patients – with excellent results. ‘Patients with persistent sensitivity not helped by the mainstream sensitivity brands have swapped to Biomin F – and almost all found it better’, he said.

Dr Don Gibson tried it out at home first. His wife suffered from sensitivity, so he bought a box for her to try – within a few days her sensitivity was vastly improved. His patients have had similar success. The practice has given them a tube to try, and ‘90% of the patients that I have recommended it to are passionate about it and have come back for more,’ he said.

‘It’s been better than I dared to hope and beyond my expectations. Some of the patients with the most significant problems, who haven’t been able to find anything that works, have had great improvement, he added. ‘I’m in favour of minimal intervention and of preventing problems arising. It must be worth a try.’

Dr Andrew Walton in North Wales has been using and recommending Biomin F for about two years. His wife was the first to try it. He’d initially been slightly sceptical about the product’s claims – but the reality spoke for itself. ‘I’ve been very impressed,’ he said. ‘Patients keep coming back and asking for it.’

His practice advises Biomin for prolonged sensitivity and 90% of those they recommend it to say it works much better than anything else they have tried. Is he surprised? ‘Yes, but it has lived up to its claims. If my wife says it works, it must do!’

Dr Nigel Slattery, from Little Lever, Bolton, heard about Biomin F at the BDA Conference, then read various articles about it and decided to try it himself before introducing it to patients. He was particularly attracted by the idea of sustained release at the right concentration to remineralise teeth, and continued protection over 12 hours.

‘I wasn’t comfortable with the concept of a “big dollop” of fluoride, most of which is washed away,’ he said. ‘Biomin F delivers the optimum amount of fluoride for benefit – you don’t need any more than that – and I like that it adheres to the tooth to be slowly taken on, looking after the teeth for 24 hours. That seems ideal,’ he said.

He also liked the extra boost that Biomin provides if there is acidity present. ‘Patients notice sensitivity and are happy to have it reduced. Many have come back and bought more. They appear to like it and it is effective,’ he said.

Post-whitening sensitivity is rarely an issue these days, with lower concentrations of the bleaching agents but, like many others, Don Gibson’s and James Durie’s practices routinely provide sample tubes with the information pack to ensure patients do not experience sensitivity before treatment starts, and to prevent it developing during the treatment. Dr Durie also recommends Biomin F for patients with fixed orthodontic brackets.

Overall dental hygiene among patients with sensitivity has improved too. ‘They are happier to brush and are now cleaning areas that were otherwise too painful to clean thoroughly,’ said Dr Gibson.

Dr Rash Patel agreed. ‘If they are motivated to clean their teeth because it isn’t painful, then they will brush better and their plaque removal will be better.’

Several of the dentists additionally reported that their patients liked the taste, texture and sensation of using Biomin F, saying it made their teeth feel smoother. All this chimes with the findings of Biomin’s UK pre-launch survey during summer 2016 among patients suffering from sensitivity. Around 65% of them found their sensitivity had improved or even disappeared altogether, and almost half said it was more effective than other sensitivity toothpastes.

Importantly, they also liked using it. Ninety-five per cent said that they found Biomin F to be good or excellent, appreciating the texture, flavour, sense of cleanliness and level of foaming.

In addition to the clear efficacy of Biomin F, several dentists liked its provenance. James Durie respects that Biomin F has been developed at QMUL, and many of his patients are in favour of that too. Dr Jonathan Waterer, from Leek, Staffs, was impressed that it had been developed by a university dental department and not a big multinational corporation, feeling that gave it both scientific credibility and less commercial impetus.

Having tried it for himself, he now recommends it to patients with sensitivity issues and they come back requesting more. He too has had excellent feedback from patients whose sensitivity was not improved by using any of the mainstream brands.

All advised any doubting colleagues to try Biomin F for themselves. With several quoting 90% of patients as having benefitted from the product, and an increasing number of professionals fully convinced of its efficacy, Biomin F is gaining ground within the profession.

‘A dental hospital would not support this kind of product with so much research and going up against the “big boys” unless it worked and they believed in it,’ said Dr Gibson.

And James Durie concludes: ‘I recommend Biomin now. I am confident that there isn’t anything better than Biomin for sensitivity.’

Biomin F is an innovative toothpaste, formulated using a new generation of bioactive glass, which incorporates fluoride, phosphate and calcium into its structure, enabling it to release these ions at a low level gradually over up to 12 hours.

As it dissolves, the glass structure in Biomin F provides a slow-release vehicle for the calcium, phosphate and fluoride together, enabling them to precipitate as fluorapatite on the tooth surface, to aid effective remineralisation of tooth enamel. Fluorapatite is more stable and resistant to acidic attack than hydroxyapatite formed by the previous generation of bioactive glasses.

The fine particles of Biomin F glass chemically bond to the calcium in the tooth enamel, holding it there to allow the saliva to slowly dissolve them and precipitate in and around exposed dentine tubules, occluding them and building up fluorapatite to prevent fluid movement (hydraulic conductance), which triggers sensitivity (Figures 1a-1c).

It has a further ‘smart’ effect – in the event of acid challenge, eg, following consumption of an acidic drink, the bioactive glass dissolves more rapidly and will help neutralise the effect of the acid to help restore the pH balance as well as replacing lost mineral.

For those who do not wish to use a fluoride-containing toothpaste but suffer from sensitivity, Biomin C has been developed. Biomin C toothpaste develops hydroxyapatite on the tooth surfaces, including any exposed dentine tubules.