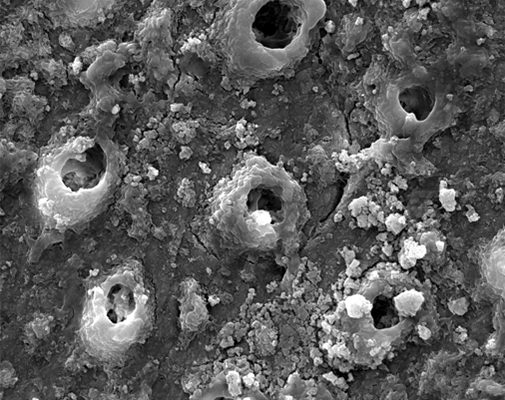 Moira Crawford speaks to hypersensitivity expert David Gillam, who considers treatment options and the role of a new product, Biomin.

Many patients may complain of sensitive teeth, particularly in response to hot or cold food and drink, and the management of dentine hypersensitivity has been something of an enigma for the dental profession. It’s a question I posed to Dr David Gillam, who is a clinical senior lecturer at Barts and The London School of Medicine and Dentistry, Queen Mary University of London and a world renowned expert on dentine hypersensitivity.

Dr Gillam first became involved with the issue in 1989 when he worked on a clinical study evaluating two toothpastes for dentine hypersensitivity and then completed his doctorate on the subject. Since then he has worked on a variety of projects studying the efficacy and claims of desensitising products, and has published widely on the subject of dentine sensitivity and its treatment. He has also chaired a UK Expert Forum on dentine hypersensitivity, which produced definitive guidelines on its management (Gillam et al, 2013).

Most recently, Dr Gillam has been closely involved with the development of Biomin F, a new product based on bioactive glass, which takes a different approach to the management of dentine hypersensitivity. Collaborating with materials scientist Professor Robert Hill, also of the Dental Institute, Queen Mary University of London, he has participated in the research and development of Biomin F and other patented products for the treatment of dentine hypersensitivity.

‘Our collaboration came from a chance meeting in 2009,’ explained Dr Gillam. ‘We developed an immediate rapport and enthusiasm for working together in developing products towards the management of the problem. I enjoy working with him and although we came from different scientific backgrounds we were able to initiate a number of ideas that led to tangible results.’

According to Dr Gillam, the pain of dentine hypersensitivity (DH) or dentine sensitivity (DS) is described by patients as ‘rapid in onset, sharp in character and transient in nature’. Formally it has been described as ‘pain derived from exposed dentine in response to chemical, thermal, tactile or osmotic stimuli which cannot be explained as arising from any other dental defect or disease’ (Canadian Consensus Document, 2003).

It’s clear from the published literature, said Dr Gillam, that DH is a common problem, though its impact on sufferers varies and its prevalence depends on how the data are collected. ‘A recent systematic review suggests that up to 33% of the population may be affected,’ he said, ‘but for the majority it is a relatively minor and episodic or transient problem. However, for about 10% of the general population may be a severe problem and have a major impact on their quality of life.’

Dr Gillam suggested that DH can present at any age, but the majority of sufferers range between 20-50 years, with a peak prevalence at the age of 30-39 years. Women complain of the problem more but, he says, that while this may be numerically correct, the difference is not necessarily statistically significant.

The teeth most commonly affected are premolars and canines, particularly on the buccal aspect due to over-zealous and/or incorrect brushing, but all teeth could potentially be involved and some recent studies have shown molars to be affected. ‘Cold food and drink, and cold air seem to be the most common triggers,’ said Dr Gillam. ‘There are other triggers, such as hot foods, but they don’t appear to have the same effect as cold on dentine hypersensitivity.’

There are a number of causes of dentine sensitivity, chief among these being:

DH has also been considered to be a tooth wear phenomenon, characterised predominantly by erosion which may expose the dentine surface and initiate the tooth surface loss. Once the dentine is exposed, the dentinal tubules will be open and exposed, and as a consequence stimuli such as cold may initiate minute fluid movement within the tubules and initiate sensitivity. ‘In general terms the dentine needs to be exposed and the dentinal tubules need to be open in order for sensitivity to occur,’ summarised Dr Gillam. ‘It should be noted, though, that not all exposed dentine is sensitive.’

Diagnosis of DH should include a thorough history of the complaint, an assessment of the severity and extent of the problem and a clinical examination to rule out any other conditions with a similar presentation, eg, cracked tooth syndrome, fractured restorations or teeth, or dental caries. ‘From a clinical perspective, the dentist should test the tooth by blowing cold air from a cold air syringe or run an explorer probe across the affected site,’ said Dr Gillam. ‘From the patient’s perspective they may simply tell the dentist that they have a problem with a tooth responding to cold food, drink etc. A simple 0-10 scale (no pain to severe pain) may also be used to evaluate the patient’s pain.’

He stressed that it is important to acknowledge that there may be different presenting features associated with DH and these should be considered when deciding on a management strategy.

The expert panel which Dr Gillam chaired in 2013 has identified three main categories of patients with DH:

The management of DH in each case will depend to some degree on the category into which the patient falls.

Once the diagnosis is made, management of DH involves preventing any further deterioration of the condition through appropriate treatment choices, dietary advice, such as reducing consumption of acid foods and drinks, education in correct oral hygiene/brushing techniques, or reducing habits that are causing problems, and perhaps more importantly the ongoing monitoring of the condition. A wide range of professional and over the counter products to reduce DH is available for the dentist to apply or recommend.

According to Dr Gillam, mild generalised discomfort from DH may be treated through a stepwise approach (Orchardson and Gillam, 2006) involving:

If, however, after monitoring, the problem has not improved, the Expert Panel’s guidelines (2013) suggest a management scheme, based on the three categories of DH, simplified into clinical evaluation, patient education and preventive advice, and corrective clinical outcomes specific to each grouping (Table 1).

What’s clear from the guidelines is that in DH there’s no single approach that will work for everyone. ‘It’s like Cinderella’s slipper,’ said Dr Gillam. ‘One size does not fit all, so the dentist will need an armamentarium of measures and products for the various presenting features for individual patients.

There are currently around 300 products and procedures on the market claiming to improve the symptoms of dental hypersensitivity, although when some of these products are tested these claims may not be realised. According to Dr Gillam, one of the exciting aspects of developing new products such as Biomin F is in innovation – being involved in a concept that actually materialises into a viable product to be used by consumers.

As a result of numerous in vitro studies at Queen Mary University of London, Professor Robert Hill and colleagues have demonstrated that delivering a precise combination of calcium, phosphate and fluoride ions in a slow release format forms an apatite material on the tooth surface as the glass dissolves.

This activity not only starts to effectively occlude the dentinal tubules, but also sustains this effect over several hours. The resultant deposit on the tooth surface has been shown to be stable and resistant to acid attack (see panel on how Biomin works).

‘Our in vitro comparison studies have also shown that Biomin is more effective than other toothpastes we’ve tested,’ Dr Gillam said. ‘This would appear to be due to the fact that fluorapatite is more acid resistant, enhances tubule occlusion, re-mineralises effectively and stablilises pH.’

A two-month clinical study published earlier this year (Gautam and Halwai, 2017) reported that a toothpaste based on Biomin technology was more effective in reducing DH than the control toothpastes.

As a clinician, however, Dr Gillam is keen to undertake more clinical studies to confirm this result, but so far the initial signs appear to suggest that Biomin may be a very effective desensitising toothpaste. Consumers seem to agree with that assessment. A Biomin user survey in the UK in 2016 also reported that approximately 65% of subjects with a history of DH indicated that their symptoms had improved or even resolved within a two-week period (Biomin data on file).

As Dr Gillam stressed, no single product will be a magic bullet to cure DH, but Biomin F looks poised to be a valuable new weapon in the dentist’s armamentarium.

How Biomin works in dentine hypersensitivity

BioMin F is one of a new generation of bioactive glasses, which were initially introduced for bone grafting. A combination of calcium, phosphorus and fluoride ions are incorporated within the structure of the glass which releases them as it dissolves gradually over up to 12 hours. This combination promotes effective remineralisation of tooth enamel through the production of fluorapatite, the fluoride analogue of natural tooth mineral.

As well its fluoride component, Biomin F contains a higher phosphate content than the previous generation of bioactive glasses, which form hydroxyapatite material in the mouth. The increased phosphate content of Biomin F aids both the effectiveness and the speed of remineralisation, and as the calcium, phosphate and fluoride ions are released, these work in concert with the saliva in the mouth to restore equilibrium following acid attack, and form fluorapatite material, which is more stable and resistant to acid than hydroxyapatite.

Tests using an NMR spectrometer have demonstrated that the fluoride in Biomin F is converted to fluorapatite as quickly as within 45 minutes in artificial saliva, and the remineralisation process continues for around 12 hours, with residual activity for up to 24 hours. At a lower pH, following consumption of an acidic drink, for example, Biomin F dissolves more rapidly to restore the equilibrium and prevent demineralisation.

Importantly for the treatment of sensitivity, the glass needs to dissolve right on the tooth surface, so Biomin F contains a polymer that bonds it to the calcium in the tooth enamel, holding it in place for several hours while the calcium, phosphate and fluoride ions are released. The glass particles are extremely small, enabling them to enter the dentinal tubules (1-5 microns across) and work to occlude them and prevent fluid flowing through them.

Fluorapatite forms preferentially on the apatite rich walls of the peritubular dentine within the tubules gradually filling and occluding them, an effect still visible after acid challenge (Figures 1a-1c). As the fluorapatite occludes the dentinal tubules, it reduces the flow of fluid through them, known as hydraulic conductance, the cause of sensitivity.

The Biomin research team believes that fluorapatite crystals probably favour growing on the existing apatite rich surfaces within the dentinal tubules, which have a higher mineral content than elsewhere. Due to the increased stability and resistance of fluorapatite, the tubules remain occluded more completely, and the hydraulic conductance shows a greater percentage reduction and faster remineralisation rates than other toothpastes tested.

Canadian Advisory Board on Dentin Hypersensitivity (2003) Consensus-based recommendations for the diagnosis and management of dentin hypersensitivity. J Canad Dent Assoc 69(4): 221-226