A statement of intent 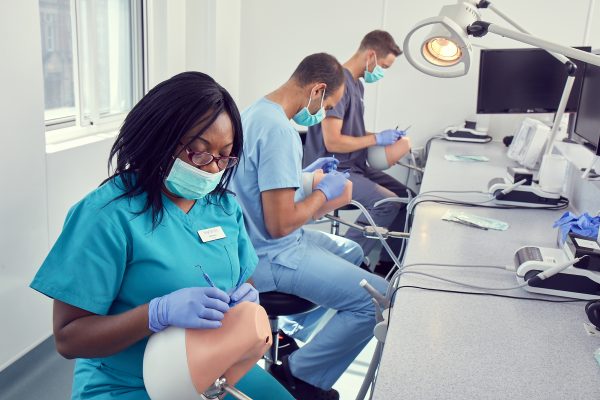 A statement of intent

‘Everyone thinks of this place as the Mydentist Academy,’ explains Mark Jones as he gestures around him at the immaculately appointed board room in which we’re speaking.

As head of the aforementioned academy, Mark would know – and to be fair, from where we sit, on the top floor of a very impressive city centre practice-cum education centre, it’s easy to see why.

The Mydentist Academy spans multiple floors of technologically-connected surgeries, consultation rooms, lecture theatres and meeting rooms in the heart of Manchester’s vibrant Northern Quarter. The lower half of the building is Mydentist Stevenson Square, one of the company’s advanced oral health centres. Head upstairs and you reach the academy.

It’s quite a statement of intent. Much of the building is an advert for technology: packed with the latest treatment centres, each surgery equipped to send live video at eye-searingly high resolutions to the huge screens found in every training room. It is easy to see why all new recruits to Mydentist come here for their induction.

I’m ready to accept all this at face value – but it’s really just the tip of the iceberg, as Mark is also quick to point out.

‘Everyone thinks the academy is bricks and mortar,’ he continues. ‘But it’s not. The academy is a philosophy. An answer to the question of how we deliver first-class training to our dentists and teams.’

And, for all that, the Manchester building is central to that philosophy, it’s by no means the only way in which Mydentist provides its dental teams with education. Huge numbers of dental professionals pass through the building’s door each week, but they too are only part of the story.

‘We have this great site, so obviously we put on lots of courses here,’ explains Mark.

‘But we’re in hotels around the country a lot, too. We’re running about four courses almost every week – it’s about 200 a year. We actually avoid hosting them in our practices because we want people to have a chance to get out of their surgeries. In all honesty, we probably run more courses out of the academy than we do in it, so although we have this building, the scope of the academy goes far beyond these walls.’

The Mydentist Academy concept has been up and running since 2013, and Mark has been steering its delivery for more than four of those years. Over that time, he has steadily grown the programmes on offer so they span from hands-on training for clinical staff right through to formalised practice manager and receptionist courses.

First is Mark’s enthusiasm for what he’s built. The second is he’s still building: there are big plans afoot to offer more courses, cover more subjects and leverage technology to reach more people.

But even so, the current structure adds up to an attractive benefit for Mydentist personnel, no matter how you cut it.

‘The original plan – the one I envisaged when I joined – was a clinical academy that offered training to the external market,’ says Mark. ‘But I soon realised that it’s one of the jewels in our crown at Mydentist: it makes more sense to train our internal team and provide a unique offering for the people helping drive our practices forward. So that’s what we did.’

The decision to keep training exclusive allows the academy to be that much more cost-effective – for example, the Clinical Excellence package that launched last year offers associates unlimited access to GDC recommended CPD as well as Mydentist’s Clinical Skills Framework for just £75. This price point is reflected in much of the other offerings available through the academy and it’s an attractive proposition, as the numbers demonstrate.

Mark explains: ‘83% of Mydentist dentists have engaged with the academy in the last year. We know that that education we’re providing is really highly valued by our dentists – and we’re very proud of that.’

Four years ago, the academy employed one full-time trainer: today, there are eight. It is a growing part of the Mydentist offering, and easy to see why. Reinforcing the idea that the academy extends beyond its Manchester home, the learning on offer is as diverse as the subjects themselves.

Much of the content by the academy is available online, whether through video or written content, but there’s a strong focus on face-to-face learning, too. Often, that comes in the shape of clinical workshops and masterclasses, but technology is powering some less conventional ways for teams to come together too.

Clinical learning forums hosted on Skype offer the best of both worlds, with real-time interaction between delegates and speakers from the comfort of their own homes. The success of these early forums means Mark is keen to roll out more.

There’s been a marked focus on developing the entire practice team over the last year too, which is set to continue in future.

‘We’re building in a really clear career structure for everyone at Mydentist – not just dentists,’ he says.

Mark is putting his money where his mouth is: new practice managers now go straight into an apprenticeship scheme where they receive formal training at the same time as learning the ropes by doing the job.

This scheme launched in 2018, followed swiftly by the receptionist equivalent, which Mark explains is a direction of travel for the entire business.

‘We wanted a programme for each job role,’ he says. ‘Our reception teams are a lot stronger than they once were, but we’re still going to be investing a lot of money in them as time goes on. They’re the busiest areas of the practice: they deserve that investment.’

Whichever way you look at it, the future looks promising for the academy as well as those who pass through its doors – virtually or otherwise.

It has to be: dentists are a demanding audience, as Mark explains: ‘I’ve worked in other professions, like law firms and accountancy for years. But I’ve never known a profession hungrier for learning than dentistry.

‘When I joined, I wanted to ensure that we offered a genuine opportunity to develop.

‘I think we’re getting there. When I look at our training programmes now I see the best packages I think we’ve ever had.’