Five-star review for closing a diastema 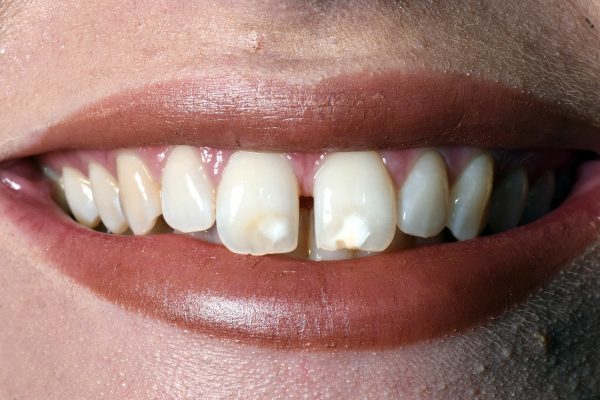 Five-star review for closing a diastema

Chirag Patel describes a minimally invasive technique using direct composite bonding to close a diastema and improve aesthetics, which has the added benefit of attracting new patients to the practice

A 21-year-old female attended Ollie and Darsh because she was unhappy with the space between her upper central incisors (Figure 1).

She also wanted an improvement in the appearance of the white spots on her two front teeth. The enamel defects had been caused by molar incisor hypomineralisation (MIH), which develops during the mineralisation stages of enamel maturation.

Following examination, the patient was advised that orthodontic treatment to close the midline gap, followed by whitening and composite bonding to improve the aesthetics of the white spots, was one treatment option. If proportions looked aesthetically balanced, composite bonding only was another choice. Porcelain veneers were also considered.

Due to cost constraints, the patient decided to proceed with composite bonding to both upper central incisors, without orthodontic treatment.

She also did not want her teeth whitened. Her shade was B1 on the Vita guide.

It was accepted that golden proportions would not be achievable using this particular treatment method, and with the budget available.

It was noted that both central incisors were narrow and rectangular in shape, which could be improved with composite bonding (Figure 2).

The UR1 and UL1 were equal in width, with a midline that was coincident with the face. The diastema was measured to be 2.2mm in the mid-third. Therefore, 1.1mm of composite bonding would be needed on the mesial aspect of each tooth.

A direct mock-up using Kulzer Venus Pearl B1 shade was tested on the upper centrals to confirm the planned outcome was acceptable.

To help her decide if she wished to proceed with the proportions achieved, the patient was encouraged to take home a photograph of the direct mock-up. She was happy and consented to the composite treatment.

The risks were explained, including future marginal staining, failure, possible mismatched colour, chipping and dulling of the composite surface.

On the day of the treatment, a latex-free lip and cheek retractor was used to isolate the teeth. This provided a wide field of vision, protection of soft tissues and moisture control.

A 000-sized retraction cord was placed, which allowed vertical displacement of the gingival margins and control of crevicular fluid.

Each tooth was prepared by the removal of the deep white lesions using diamond burs and long bevelling (Figure 3).

The central incisors were individually etched with 37.5% orthophosphoric acid etch gel and bonded using Ibond Universal (Kulzer). Ibond was used because of its simple, precise application and reliable bond strength. Teflon strips were placed to isolate the adjacent teeth and for soft tissue control. Digital callipers ensured the correct proportions of both teeth.

Venus Pearl B1 shade was chosen to restore the UR1 and UL1. An ultra-fine composite placement instrument was used to build-up the mesial surface of the first tooth, using a freehand composite technique. The composite was then contoured with fine interproximal finishing strips and aluminium oxide discs.

The adjacent tooth was built-up palatally to the correct profile. The Mylar Pull technique was used to ensure tight contacts. This method uses a Mylar strip to draw unset composite through the contact area, to contour the material and adapt it well to the adjacent teeth.

The soft and creamy consistency of Venus Pearl makes it easy to sculpt precise anatomy, without the need for modelling resins, which can affect the final polish of the composite. It also allows complete adaptation to matrices, preventing voids in the material, which can occur with the use of less flexible composites.

Gross facial finishing and secondary anatomy were completed with a red fine diamond bur (Figure 4). Medium and fine aluminium oxide discs were used to finish the outline of the teeth.

The Venus Supra kit allows for a high-lustre shine (Figure 5), without the loss of secondary and tertiary anatomy created during the initial stages of polishing. Felt discs and a diamond paste were used to give a final, natural sheen.

In this case, the clinical outcome successfully met several objectives. The result addressed the patient’s aesthetic concerns and her limited budget. Composite bonding treatment has also helped to prevent an early transition into an invasive restoration cycle, which is an important consideration at such a young age.

The patient was overjoyed with her new smile (Figure 6). She has since promoted the results of her restoration treatment on social media, with a five-star review on Facebook. A shared selfie of her new teeth on Instagram has also attracted new clients to the practice, eager for more information about minimally invasive treatment.