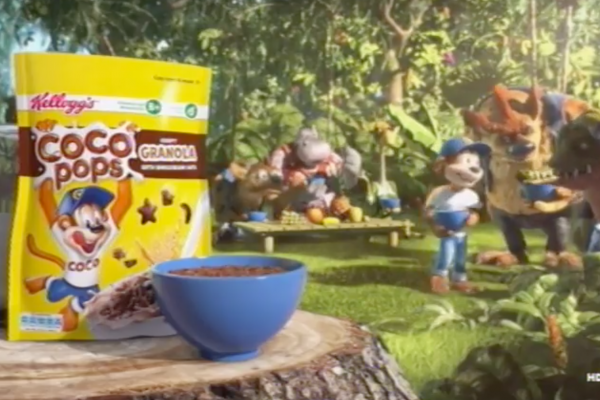 KFC and Kellogg’s told to remove junk food advertising that appeals to children.

Specifically, ASA is referring to an advert promoting Coco Pops during a cartoon watched by children, and KFC advertising a Mars product on a phone booth near a school.

‘We’re disappointed with this decision as we ensured throughout the advert we were only promoting the Coco Pops Granola product, a cereal that can be advertised in children’s airtime,’ a spokesperson for Kellogg’s UK and Ireland, said.

‘It’s particularly surprising when a ruling from the television regulator Ofcom, published on Monday, confirmed that the same advert was not in breach of the advertising code.

‘We have now reduced sugar in Coco Pops Original by 40%, but kept the same great taste.

‘This means original Coco Pops now also meets the strict nutritional profiling for foods that can be advertised on children’s TV.’

Now McDonald’s has improved the nutritional content of its Happy Meals, ASA believes it falls in line with advertising rules.

The McDonald’s advert was a voucher promotion found on the back of a bus ticket.

‘We comply and go beyond the UK’s stringent regulations on marketing to children and use our marketing to help families understand more about the range of food options we offer,’ a McDonald’s spokesperson said.

The decisions come with an ongoing debate over adverts for foods high in fat, sugar and salt targeted at children.

The Committee for Advertising Practice (CAP), which sets the rules enforced by the ASA, specifies that ads for sugary and salty food and drink are not allowed to in or around media directed at children, or where 25% of the audience is under 16.