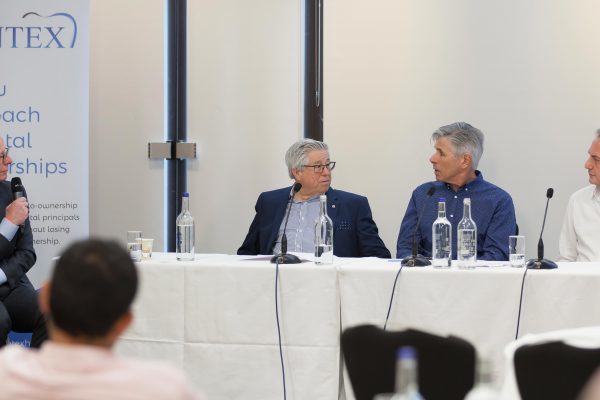 The question – or questions – on everyone’s lips were answered at Stars of Dentistry last month when Dentex hosted a panel discussion in front of a live audience.

Hosted by the always-relevant Chris Barrow, the session tackled the big issues about the newest business model in dentistry head on, asking: ‘What does co-ownership mean for dentists in the UK?’

Chris put the panel, made up of Dentex CEO Barry Lanesman and partnering dentists Mervyn Druian and Stuart-Bowen Davies, through their paces as he got to the bottom of what sets this new model of practice ownership apart. This at least was quickly made clear. The term partner isn’t just for show: co-ownership is about dentists buying into something, rather than simply selling their practice.

But what about the details? During the hour-long discussion, the three panellists covered those too, answering burning questions from Chris as well as the arrayed audience, and laying bare the story on how joining Dentex really works for dentists.

Barry made sure to explain the business model in detail, touching on how partnerships work, the marketing support offered to practices and explaining more about the parity of shareholding deals between partners.

Mervyn and Stuart ran through their own experiences of partnering with the group, explaining why they first joined and how they felt as part of the Dentex family.

The two dentists were looking for entirely different things when they joined – with Mervyn wanting to step away from the heavy administrative burden of running a practice, and Stuart looking for support in expanding a small group of practices. Yet both were effusive in their praise of the system and in terms of getting the results they need.

Mervyn explained: ‘I’ve now been a partner for several months, and it’s been fantastic. I’m as busy now as I ever was, and it’s great running a practice when you don’t have to worry about the admin. I’m just sorry I didn’t do this 10 years ago.’

Chris took the pair through further details, quizzing them on aspects such as the handover and integration, before Barry talked through the history of the business – as well as its future, explaining in no uncertain terms that Dentex is a long-term proposition for all involved.

‘We’re creating a business that is unique,’ he said. ‘And we intend to keep this business independent for all our shareholders. We may get a big offer [from investment capital/private equity] but all that does is give liquidity to our shareholders: we don’t intend to sell.’

Barry reinforced points raised by both dentists that the benefits of partnership extend far beyond simply reducing admin. Answering questions from the floor, he reassured dentists that existing practice managers would see their roles grow and talked about the substantial growth experienced by many practices that have joined the network so far.

To understand the potential inherent in a partnership model one simply has to look at the demographics, the audience were told. Dentists partnering with Dentex are around five-10 years younger than the age at which dentists typically choose to sell their practices, Barry explained.

The issue of growth and realising long-term potential was one that Chris leapt upon as the debate drew to a close.

‘Although it’s nice to get rid of admin, the word growth keeps coming back into the equation,’ he pointed out.

‘And that’s what strikes me as setting co-ownership, and Dentex in particular, apart from a lot of what’s going on in dentistry at the moment. It’s not about putting a plaster on the wound: it’s about building a future.’