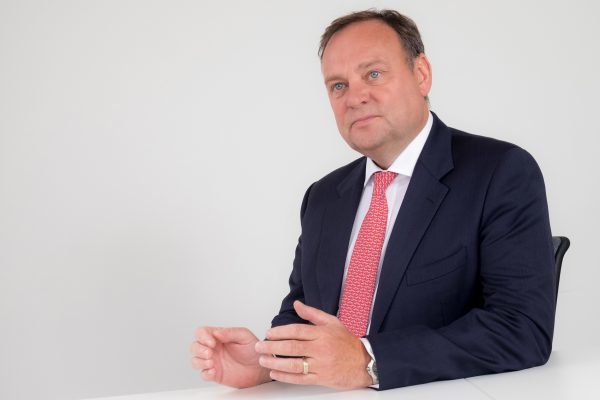 As John Makin marks two years as head of the DDU, Seb Evans speaks to him about how the last few years have gone and what his plans are next.

A lot can happen in the space of two years. Just looking back over the last two years – Donald Trump has been voted in as US President, the word Brexit has entered the dictionary and Leicester City won the Premier League for the first time.

Although it often feels like things in dentistry move slowly, it has been a whirlwind last few years for the profession too – the General Dental Council launched Shifting the Balance, there has been a continuing upwards trend of complaints in NHS dentistry and clinical negligence claims continue to grow in value.

It’s been a busy start to life as head of the Dental Defence Union (DDU) for John Makin. But two years after he was appointed and we first interview him, we went back to find out how things have gone and what’s next for the DDU.

What’s going on at the GDC?

Two years ago, the major topic of conversation amongst most dentists (and the Professional Standards Authority) was what’s going on at the General Dental Council (GDC). In that respect, not much has changed, but now the noises coming from Wimpole Street are much more in line with what you’d expect from a dental regulator.

Over the last two years, John Makin has been negotiating with leaders at the GDC to discuss ways it could improve its fitness to practise (FtP) processes. In the past year, the number of cases being forwarded to a formal hearing has significantly dropped and the GDC has started consulting with the profession on the best way to move forward.

John explained: ‘The GDC has started to make progress at “demand management”, by which I mean reducing the number of complaints it receives and redirecting complaints that should be made elsewhere. This is good news both in terms of the human and financial cost of GDC investigations to the profession.’

Despite the huge shift in the GDC’s position, the DDU isn’t standing still: ‘Some 70% of matters referred to the GDC are not considered to be allegations of impaired fitness to practise and so would be better resolved elsewhere,’ John says. The DDU’s position is to encourage first tier resolution. First and foremost, patients should be encouraged to raise their concerns with the dental practice.

For those complaints that do make it through to the GDC, the DDU believes a better balance between fair treatment of dentists and public protection needs to be struck. The recent introduction of case examiners, whose training John contributed to has certainly helped with this. The first year’s figures on the work of case examiners has been encouraging.

On the face of it this is quite a depressing statistic, but John feels there is a more optimistic note. He points out that while 40% of those who complained or considered complaining would have done so to the practice, a large proportion were unsure who to complain to. There is an opportunity to bring the number of patients going directly to the GDC and the NHS down by making sure patients are signposted to complain directly to the practice first.

‘It might sound counter-intuitive, but the easier you make it for patients to complain directly to the practice in the first instance, the more you will improve your chances of resolving a patient’s concern at an early stage. Advertise your complaints procedure on the website and in the surgery and get advice from your dental defence organisation early on if an issue arises. Our team are experienced dentists who understand the pressure you are under and can guide you through the process.’

This could also help another area that John is concerned about. Under an initiative known as NHS Concerns, the GDC refers cases that don’t meet its FTP criteria to NHS England. Unfortunately, these cases are automatically considered under performance arrangements rather than via the complaints procedure, potentially disadvantaging both patients and dentists. Despite this being a well-practised procedure, complaints passed on to NHSE aren’t necessarily dealt with uniformly across the whole of England, let alone across the rest of the UK where Wales, Scotland and Northern Ireland don’t have a similar system.

John also points out that:

‘Referrals to the NHSE performance management procedures should only be made in cases where there are grounds for concern about the practitioner’s fitness for purpose,’ John says. ‘In short, the principle should be that issues are resolved using the lowest level of intervention needed to achieve the appropriate result for practitioner and complainant.’

One recent trend the DDU is eager to raise attention of is the rise in patients making complaints on social media. This can be distressing and often difficult to respond to, but the DDU has listed the available actions to you:

But first and foremost, John recommends getting in touch with the DDU via its 24-hour helpline so you can discuss all the risks that come with the above actions, in particular, the dangers of revealing confidential information.

While numbers of GDC cases remain high, there has also been a rise in clinical negligence claims. The current trend for claims is certainly upwards, particularly in terms of the costs of claims.

Claimant’s legal fees are also a problem and the DDU has long been campaigning for better controls to help bring the costs down. One example of a case saw a lawyer receive four times as much as the patient making the claim. The DDU is representing members’ views on a working group that has just been established by the Government and wants quick action on this.

The high compensation amounts has led some in the profession to claim that indemnity providers would rather settle claims than fight the dental professional’s side in court.

‘The DDU defends 58% of claims notified,’ John says even though dental claims tend to be carefully selected by specialist claimants’ lawyers in advance. ‘We mount a robust defence of cases where possible and never settle for expediency or without permission from the dental professional concerned.’

John explains that the DDU is sympathetic to the impact rising indemnity costs have had on dental professionals in recent years, particularly at a time when practice incomes are increasingly squeezed. ‘With the costs associated with GDC cases and clinical negligence claims, the DDU continues to influence the dento-legal environment, with a view to minimising the human and financial cost on members’ John concluded.

It certainly has been a rollercoaster last two years in the profession. With a new NHS dental contract on the horizon and the GDC beginning to reduce the number of professionals going through its FtP process, it doesn’t look like things are going to slow down over the next two years. However, with John Makin’s previous experience as head of the DDU, you can be sure that he will be fighting for the profession’s best interests when the opportunity arises.