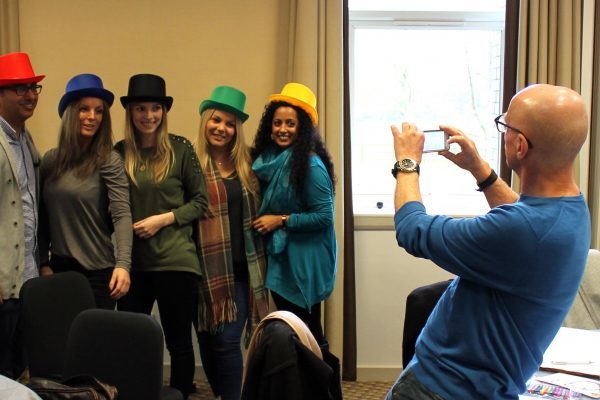 If you’re looking to take your whole dental team out next year, make sure you book your place at the Practice Plan Workshop Tour.

Christmas is now well and truly over and it’s time to start planning out your 2018 calendar. When you’re flicking through the 2018 list of dental conferences and deciding which ones to attend and which ones to avoid, there is one conference that would be worth putting in the diary, not just for the dentist or the practice principal, but for the whole dental team.

Every year Practice Plan runs a workshop tour that travels around the country and is usually run by two speakers, well known in dentistry. Exclusively for all Practice Plan members, the tour is for the whole dental team to help overcome common problems experienced in the practice.

In 2017, and for a few more dates in 2018, it will be Chris Barrow and Sheila Scott’s turn to head Practice Plan’s Workshop Tour. In their talk titled ‘Top hats, toast and moments of truth’ Chris and Sheila introduced new ways of thinking and helped teams to understand ‘collaborative visualisation’, which can help to generate new ideas benefitting you and your team.

In Sheila Scott’s final tour before she retires, she plays on the idea of using different coloured top hats to help focus the team’s thinking during team meetings.

All too often good ideas can be pushed aside and forgotten about because negative comments are made. ‘The problem is, we’ve been taught to be argumentative,’ Sheila explained. This can make it difficult for all of the team to have their say, maybe because they feel any ideas they may have will be knocked back, or maybe because they just feel too shy or can’t shout as loud as others in the team. It’s for this reason Sheila believes teams should dedicate a set amount of time to six different areas. These areas are signified by different coloured hats:

By following these six parts when undertaking a team discussion, teams can dedicate time to every angle of every idea, without arguments or negative thoughts shouting down good ideas. If teams can dedicate a couple of minutes to the positives, then, in a separate discussion talk about the negatives, it is easier to focus everybody’s minds and explore all avenues, rather than just get distracted by either the loudest voice or just the negative thoughts.

How do you make toast? It’s quite a straightforward question and a straightforward answer, you might think on first glance. Chris Barrow opened his session by asking teams to draw (no words or letters were allowed) how toast is made. Every team came up with different ways toast could be made, with varying levels of detail.

This method is called ‘collaborative visualisation’. The goal is for the whole team to visualise a certain process, for example a new patient experience. Everybody in the practice will have their idea of what happens when a new patient visits the practice.

Using collaborative visualisation, everybody can contribute to drawing up how a new patient should be greeted when they interact with the practice, the whole team can have their say on what they think is important. The collaborative visualisation process works better than conversations because the process becomes a lot clearer when drawn out in front of everybody. Finally, when the ideal scenario has been put together, after taking out images that the team agree aren’t necessarily important, or adding in images where something may have been missed, Chris claims there is more of a sense of ownership and engagement from everybody on the team to the process. So, with the new patient journey idea, everybody in the team is more likely to understand and buy into the journey because they have all had their say and seen it drawn out.

Towards the end of the day it was the teams’ opportunity to put into practise what they had picked up through the day, with the advantage of having Sheila Scott and Chris Barrow to lean on for some more specific advice on their practice.

‘I’ve never been to a Practice Plan workshop before, this is my first one,’ Kishan Chavda, dentist at East Park Dental Practice in Northampton, said. ‘I think it’s been great, it’s rejuvenating. I’ve listened to our team, it’s a great way to bring the team together and make a group effort to pull the practice forward.

‘All CPD courses now are aimed at a particular part of the team, dentists, DCPs or nurses, but this day brings everyone together, which is really nice.

‘Sheila Scott actually came and gave a chat to our practice earlier on in the week and this has helped to follow on from that, it’s been really good.

‘I’d most definitely recommend it. Practice Plan is really great, encouraging practices to put themselves out there. Practice Plan gives you help towards marketing as well. It helps provide good health care to your patients.’

So, when you’re planning your diary for 2018, if you’re looking for a day to take the dental team out, the Practice Plan Workshop Tour is a great way to encourage your team and come up with some new ideas for your practice. Make sure you book your team on to 2018’s tour dates before they fill up!