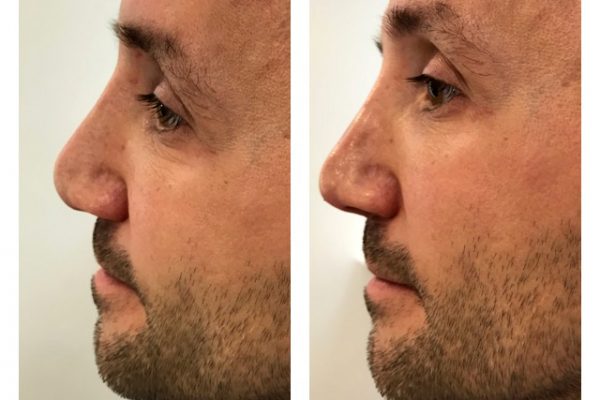 Tim Eldridge provides an overview of this novel treatment for dentists, and presents a successful case

The first signs of non-surgical treatments to the nose were discovered in Egypt and the Far East hundreds of years ago. In the 15th century, surgical interventions consisted of skin flaps from the arm, which failed after a short period of time, leading to septicaemia and death. In the 18th century, surgical rhinoplasty evolved for the punishment of criminals with amputation of the nose, and later that century, a technique was developed for nasal reconstruction using a frontal flap.

Fillers are much less invasive than surgery, and in some instances, are proving to be the ideal alternative. There are many advantages of using fillers as an alternative to surgery. Fillers have a finite life, meaning the products break down naturally over a period of time. Although this requires repeated treatment to maintain the effect, the desired result can be altered as the natural ageing process occurs, giving a harmonious outcome.

Recovery downtime is reduced with fillers compared with surgical intervention, and patients can generally return to work immediately with limited side effects.

In approximately 30 minutes, patients can experience pleasing results without the need to take any time away from their daily commitments. The effect will last for months, but is crucially not permanent, allowing adjustments to be made at the next appointment, should they be necessary.

The results achievable with fillers are, however, restricted, and reducing the size or width of a nose or a hump can be a challenge.

The nose plays a vital aesthetic role in harmonising the upper and lower part of the face. When performing medical rhinoplasty, one should always enhance the patient’s ethnic features rather than dilute them. There is no standard technique for medical rhinoplasty with fillers; the technique depends upon a number of variations, including the defect to be corrected, the anatomy of the nose, and the ethnic features of the patient. There is quite a difference in anatomy between Caucasians and African, Far- and Middle-Eastern races, hence a different approach will be required.

The nose is a hub of arteries, veins, and nerves, so to avoid any complications, a thorough understanding of its anatomy is required. The majority of complications associated with medical rhinoplasty are due to accidental injection into blood vessels, or compression of blood vessels causing local problems or embolisation.

Both cannulas and needles can be used to augment the nose. Cannulas obviously reduce the risk of intravascular injection, but this is not guaranteed. Depending on the shape of the nose it can be difficult to augment certain areas with cannulas, especially if there is a large dorsal hump. In these circumstances, a needle may be better, but technique relies on
good aspiration.

Which filler is most suitable to augment the nose is an important question. Biphasic fillers such as Perfectha Deep, which has a larger particle size, are generally regarded the choice of material over monophasic fillers for rhinoplasty. There is a reduced risk of intravascular injection using biphasic fillers, and they absorb less water so are less likely to cause problems of unwanted increased volume.

Post-surgical rhinoplasty can cause difficulties when performing medical rhinoplasties. The vasculature can be proven to be a problem along with adherences.

This patient – a doctor – was attending a Perfectha advanced rhinoplasty masterclass hands-on training course, to learn the technique. During the course, delegates assessed each other. His history revealed several incidences of trauma to the nose from playing rugby. Once his rugby career finished he decided to undergo surgery, which he was very satisfied with.

During the assessment of each delegate, he expressed an interest in improving the appearance. After 30 minutes of topical anaesthetic, the area was cleansed in accordance with correct protocol. A total of 0.3ml Perfectha Deep was injected into various parts of the nose to improve the overall appearance.

Not only does the nose appear straighter, in profile the tip is more rounded, producing a softer, more pleasing look. The patient was very pleased with the result, experienced minimal down time, and continued to successfully treat his own patient on the course.

Using fillers as an alternative treatment requires a thorough knowledge of anatomy, combined with safe standards (a good aseptic technique), recognised techniques, and artistic flair. Currently, fillers will never replace surgery, but for minor defects they are a perfectly suitable alternative.

Hyaluronic acid fillers such as Perfectha are the most appropriate filler, due to their limited life span and the ability to dissolve should the need arise, so they are more easily corrected than the alternative fillers. Results can last anywhere between 18 and 24 months with fillers.

When performing treatments/examinations, dentists regularly assess the balance and overall aesthetics of the face. They look at the ideal ratios of lips to teeth, the smile such as a partial or a full smile, phonetics, and how the teeth relate to the soft tissue surrounding the mouth.

During training, dentists are taught in great detail about head and neck anatomy; each day they often inject cranial nerves in sensitive areas of the head with an anaesthetic, which potentially can have severe, even fatal effects on the body. As such, there are many facial aesthetic procedures that complement dentistry.

For dentists who are already providing hyaluronic acid dermal filler treatments, and would like to learn more about training in no-surgical rhinoplasty, contact [email protected]