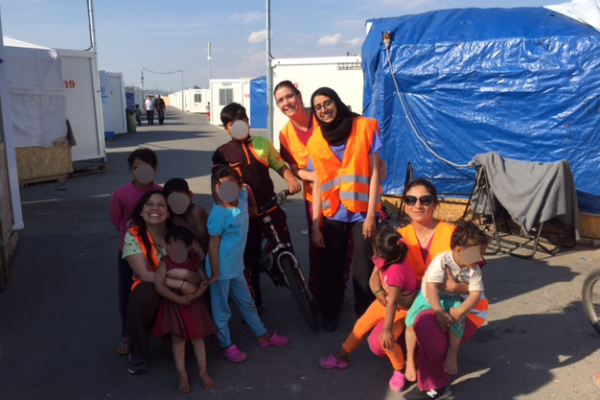 Tariq Drabu (centre) believes his volunteer trip to Greece was an eye-opening and rewarding experience for him and his patients.

Brexit, the 2017 election and the EU/Turkey refugee deal has taken the news of refugees fleeing war torn countries off the front pages of our daily newspapers and TV news bulletins.

However the words that these people have been labelled with over the years have never been far from my mind – ‘refugee’, ‘asylum seeker’, ‘migrant’ and the shameful way that they are portrayed in some sections of the media and by some politicians has resonated with me personally, as the child of parents who were caught up in the partition of India and Pakistan in 1947 – my father who was studying in Lahore (became part of Pakistan) at the time of partition was unable to return to see his parents in Indian Kashmir until 1965.

Although it sounds clichéd, 30 years of dentistry has given me so much in terms of life experiences, career opportunities and professional success – I did want to give something back. More importantly I wanted to actually meet these people in person, hear their stories and gain some understanding of their lives, hopes and aspirations.

Friends and colleagues of mine had volunteered with Heath Point Foundation (HPF) in Greece. It is an organisation that has been running for less than two years – undertaking both medical and dental relief work.

Our foundation dentist from 2014 Shafia Sabir encouraged me to go and join her and I also took along one of my dental nurses Kerry Oliver – I am grateful to her husband Neil for looking after their three-year-old daughter Iona for one week while Kerry was away.

The dental work that HPF undertakes is centred around mainland Greece in Thessaloniki. We flew out on 14 April returning on the 21. The refugees have been relocated into camps hotels and disused facilities all within around one hour drive of the main city.

On arrival, we checked into our downtown hotel and undertook some sightseeing of the city that afternoon and evening. That evening we met for dinner with the rest of the HPF team that were already there. The team is well established in terms of having ground coordinators and supporting translating staff who are also dentists.

Our first working day was at the Polikastro refugee camp, around 45 minutes out of Thessaloniki. We arrived for about 10:30 and the ground team were already there unpacking the portable dental clinic out of the back of a Fiat van. The clinic has two (and up to three if needed) portable chairs, a shared suction unit and a portable dental unit for two chairs with fibre-optic high speed hand pieces. The camp as such is basically lots of units called Isoboxes (something like portakabins) – thankfully nobody is in a canvas tent anymore. There is an area in the camp with units dedicated to medical relief, which are clearly marked by their European Union or Red Cross signs outside the doors. We set up in one of the cabins and within 20 minutes we were ready to go to see our first patients. The dentistry undertaken there centres around the relief of pain whether by means of extractions or more frequently extirpations. It’s a high turnover with the whole day spent standing up – not too bad for me since most of my surgical practice is done that way. A headlight is pretty much mandatory as there is no operating light – I took my loupes with me which proved to be invaluable.

The majority of patients were refugees from Syria and Iraq. A geography teacher from Baghdad, a pharmacy assistant, a barber – just every day people fleeing from the brutality of bombs and war. Each of them had a story to tell and each and every one of them would return to their home country if the conditions were stable and the war ended. Nobody chooses to be a refugee and inhabit a plastic white box with an air-conditioning unit in mainland Greece. None of them want this lifestyle – as one of them said to us when we asked him where he would like to go to be resettled: ‘I just want to go somewhere where I will be treated as a human being’. Many of them had made the journey to Greece via the treacherous boat crossings – some had lost friends and family along the way. Most of them had spent their life savings to give to people smugglers to get them across into Greece.

The first day was emotionally and physically challenging for us all – however, by the end the sense of fulfilment was immense, from the gratitude of the patients to the beaming smiles and hugs from the children as we handed out presents. Subsequent days followed the same routine – a Whatsapp pin drop onto Google Maps the night before followed by driving to the relevant site the next day.

It was great to meet and work with professional colleagues from around the world – Mariana, a dentist from Venezuela currently working in Pamplona in Spain, Parisa, a maxfax trainee from London and Spiros, a local Greek dentist who plays in a live band regularly in the evenings in the bars of Thessaloniki. Ideas were exchanged and different techniques and approaches were learned in a spirit of cooperation and learning.

The story of two patients have stayed with me in my heart and on my conscience since I met them. Ibrahim – from Damascus aged 20 who was arrested by the Syrian security forces for simply being in the wrong place at the wrong time. He then managed to get out and was imprisoned in every country he went in on his way to Europe – Turkey, Macedonia and finally Greece. He had been in Greece for some 15 months and was hoping to go to Belgium to study architecture. I thought to myself that not only was he the same age as my children but also he must have been a teenager when he was imprisoned in Assad’s jails as well as jails in Syria, Macedonia and Turkey.

The other was an Algerian rapper who has more than a quarter of a million Youtube hits who had to flee when he started rapping against the Government. He has been in Greece for around 12 months.

Mariana summed it up beautifully: ‘At the refugee camps, we realise how fragile and vulnerable we all could be. We live under the illusion that we can control our lives, but this isn’t true at all. Our control is very limited. What did these people do to live in a refugee camp, is it their choice? Is it their responsibility? The answer is no, not at all. They are there as a result of a geopolitical context bigger than them. We cannot change the world where we live, but maybe, doing the simple exercise of empathising with the suffering of others or their joy, we could manage our ego and expand our life’s experience. Maybe we could heal ourselves while we try to heal other people. So, while powerful people build walls, here we are, the simple real human beings, building bridges, small bridges, and sharing smiles, stories, laughs and hugs.’

The seven days passed rapidly. Soon we were back on a plane home to Manchester. There is no doubt that the experience certainly made me reassess my own life and my outlook on life. It made me appreciate what I have and be grateful for that. It also made me realise that whatever adversities the refugees had experienced for each of them there was always hope. I am glad that I undertook this experience and would have no hesitation in recommending it to others.