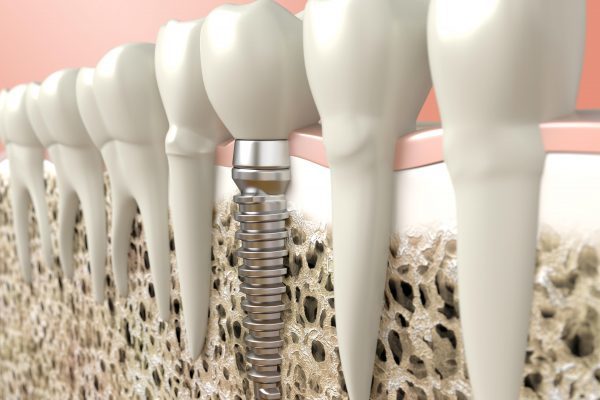 A peptide found in saliva could improve implant integration, according to new research.

After staining human, mouse, and canine gingival epithelial cells and fibroblasts, the researchers placed the cells on titanium-coated disks. Hst1 was added to half of the discs and the experiments were repeated at least three times with each of the cells.

After just three hours, the cells exposed to Hst1 adhered to the discs twice more often than the cells without Hst1.

‘Salivary peptide histatin-1 stimulates cells to attach and spread, which can be used to improve the integration of dental implants,’ she said. ‘Since histatin-1 also promotes cell-to-cell adhesion, it enhances the barrier function of the tissues, thereby protecting the body from negative influences from outside.’

Van Dijk noted that Hst1 also improved the spreading of the cells in mice, which don’t naturally have the peptide in their saliva.

‘Histatin 1 promotes the attachment and spreading of cells on different substrates, including titanium,’ van Dijk said. ‘This indicates that Hst1 could be used to improve implant integration.’

Despite being in the early stages, the research is promising.

The researchers are now looking to perform in vivo studies, and have submitted a proposal to study Hst1 and implants in animals. In addition, van Dijk is considering human applications, such as having an Hst1 implant coating or an injection.

‘Our future plans involve looking into the mechanism by which histatin-1 performs its function,’ she said. ‘We would like to take it further toward being a possible treatment in the dental clinics by finding a partner, such as an implant company, with which we can develop the product together.’