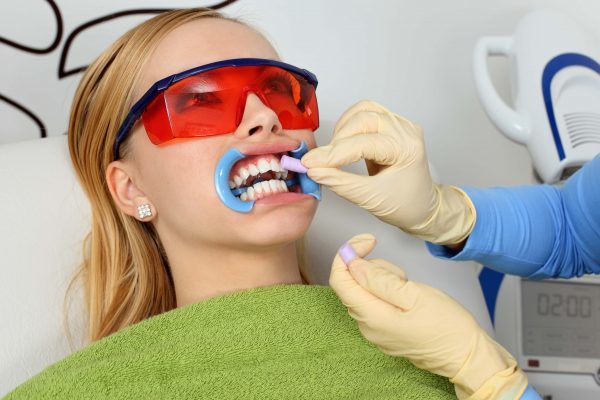 With the rising popularity of teeth whitening, there has been a lot of illegal activities by unqualified individuals who offer the service at much cheaper rates. The effect has been that more and more people have had to endure permanent teeth damage because, professionally speaking, beauticians are not trained to determine a person’s suitability for teeth whitening.

Dental professionals have had to grapple with this issue. Although it is against acceptable dental practice for anyone who is not a dentist to give treatment, advice or attendance that should ordinarily be given by a professional, it is not unusual to find unqualified individuals engaging in this.

Another major concern for dentists, has been the increase in different teeth whitening products, some of which consumers have been encouraged to apply without seeking professional help or considering medical history.

According to a statement released by the American Dental Association, there is a need for the concept of whiteners to be defined in uniform terms, given the rising number of teeth whitening products. Between bleaching products that help to remove intrinsic and extrinsic stains and non-bleaching whitening products, a key ingredient is hydrogen peroxide.

The use of hydrogen peroxide

The rise in numerous self-help procedures in relation to teeth whitening is a worrisome development, especially in relation to the use of hydrogen peroxide. Although there are benefits that professionals have attested to, the problem is in the uncontrolled information and advice surrounding the use of hydrogen peroxide as a teeth whitener. According to research, it has a cytotoxic effect on the dental pulp cell, which can be harmful, if it is not applied by a professional.

Dentists and hygienists have expressed growing concerns over the increased use of bleaching agents by the public. Accordingly, the American Dental Association (ADA) developed a standard to assure professionals of the safety of bleaching products. The standard is based on requirements such as an acceptable concentration level of active ingredients, enamel safety, soft tissue and restoration safety, as well as instructions for proper use.