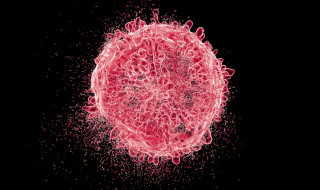 New research has shown that viral infections can evolve to affect men and women differently and become more virulent in men.

Particularly if the virus is transmitted from mother to child, women are more valuable to the virus than men are.

Researchers from the School of Biological Sciences at Royal Holloway looked at the human T-cell lymphotropic virus type 1, (HTLV-1), which can cause leukaemia in infected individuals. Infected women tend to develop leukaemia less often than men when there is more mother-to-child transmission. Mortality due to infectious diseases is often higher men than women, but this has historically been attributed to differences in the immune system of each sex.

Evolution of an illness

‘It has already been established that men and women react to illness differently, but evidence shows that viruses themselves have evolved to affect the sexes differently,’ said Professor Vincent Jansen, from the School of Biological Sciences at Royal Holloway, University of London.

‘Viruses may be evolving to be less dangerous to women, looking to preserve the female population. The reason why these illnesses are less virulent in women is that the virus wants to be passed from mother to child, either through breastfeeding, or just through giving birth,’ added Dr Francisco Úbeda, also from the School of Biological Sciences at Royal Holloway.

In their paper, The evolution of sex-specific virulence in infectious diseases, the researchers used mathematical modelling to show that natural selection favours viruses that have a lower rate of fatality in women than in men, if the virus can be passed from person to person and from mother to child. It appears that women are more valuable as hosts for the pathogens and they are able to pass on the pathogen in more ways than men, who are only capable of transmission from person to person.

‘Pathogens are adapting to be less virulent in women to increase their chances of being passed on to the next generation during pregnancy, birth and infancy,’ Dr Úbeda continued. ‘Survival of the fittest is relevant to all organisms, not just animals and humans. It’s entirely probable that this sex-specific virulent behaviour is happening to many other pathogens causing diseases. It’s an excellent example of what evolutionary analysis can do for medicine.’

Looking at how HTLV-1 affects people in Japan and the Caribbean, the research showed that the virus is about two to three and a half times more likely to progress to become adult T-cell leukaemia (ATL), which is lethal, in Japanese men than women. In the Caribbean, however, the likelihood of HTLV-1 progressing to leukaemia is roughly equal in men and women. HTLV-1 can be passed through breastfeeding and the practice being more prolonged in Japan, may have prompted the virus to become less fatal in women.

The full paper was published in Nature Communications and can be accessed here.