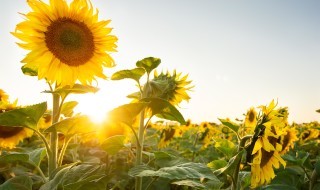 A dental practice in Exeter has been bringing the community together to raise money for AgeUK.

Jacqui Cornish, community fundraising manager for AgeUK Exeter, said: ‘Life Dental and Wellbeing came up with a fantastic fundraising idea to raise funds for our budding friends project – a project for people with dementia and their carers. The “enormous sunflower growing” competition was fantastically well received across the city by families, school and the businesses community. Raising over £850 in this first year has been absolutely amazing.

‘The team at Life and Dental Wellbeing have taken this project and made it a huge success. From launch to judging, they have done the lot! They are an example of how businesses can make a huge difference to their communities and we are delighted to have them support us.’

Ben Pearson, practice owner and principal dentist at Life Dental and Wellbeing added: ‘We were so pleased to be able to raise some money for the budding friends allotment project. Recent research has revealed that there may be more significant links between gum disease and dementia and so it is a project that we fully support. We hope that the competition will become an annual event. Both this year’s winning sunflowers were grown in gardens in St Thomas, so maybe there is something magical in the soil there – who knows?’

The winning specimen in the under 11’s category, grown by 10-year-old Adam Summerfield, reached a whopping 2.40m in height.

The 11-99 age group was won by Mark Forsey of Stephens-Scown Solicitors LLP with a very respectable 1.84m. Donna Black from Stephens-Scown LLP said: ‘It really captured the imagination of our staff. It can be hard to come up with new and different fundraising initiatives and this one really worked. Well done to everyone who was involved.’