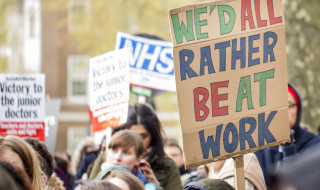 Kevin Lewis weighs up the latest round of NHS junior doctors’ strikes in England.

Lost in all the noise and acrimony of the junior doctors’ dispute is the fact that the unilateral imposition of a new contract on the junior doctors is not a UK-wide issue. It is only being mooted in England and driven forward relentlessly by NHS England.

Meanwhile, neither Scotland, nor Wales, nor Northern Ireland have any plans to extend the obligations for weekend working – indeed, they argue that they are unconvinced by the ‘evidence’ that care suffers and risks increase at the weekend. Perversely, several studies by respected authorities (independent of the NHS) in England have reported that deaths may even occur less often on Sundays than on weekdays, and at worst seem to occur with a similar frequency. Conversely,  there is compelling evidence that adverse events that do not result in the death of a patient, are much more likely at weekends.

The General Medical Council (GMC), on the other hand, regulates medical practitioners across the whole of the UK so when it issued thinly veiled threats to registrants, hard on the heels of the ‘think again’ statements from the English Royal Colleges (of Surgeons and Physicians, respectively), they were aimed primarily at junior doctors in England.

The GMC’s public statements in early September expressed its ‘extreme concern’ at the risks to the continuity and quality of patient care in the face of strikes of key staff at short notice that gave trusts insufficient time to make robust contingency plans.

Most dentists, I suspect, will have considerable sympathy for the junior doctors. For dentists there is a haunting familiarity in a government wanting to promise something to consumers without being prepared to pay for it. It has been costing NHS England a King’s ransom to fund all the locum staff that have been parachuted in to plug the holes in non-consultant NHS cover overnight and at weekends. Making it a contractual requirement for your core workforce to cover these weekend shifts (at normal rates) is a quick fix and a much cheaper one.

The British Medical Association, however, has been arguing that having junior doctors on duty at weekends is only a partial solution unless you are also prepared to surround them with all the other infrastructure that exists during weekdays. Quite late in the day (in early September) NHS England headed off this potential ‘own goal’ by publishing a report giving hospital pharmacists a public warning that they too will need to extend the amount of cover available at weekends to support the doctors on duty.

Apparently, only 50% of hospitals currently have pharmacists available on the wards at weekends and dispensing services are limited to just five hours a day (it is twice this during the week). I am prompted to wonder how many other equally surprising anomalies might yet crawl out from under the NHS woodwork.

The widely-trailed diagnosis of a ‘weekend effect’ is partly based in fact, therefore, and partly in myth. There can be no doubt, however, that there are political undertones too because the offer of a 24/7 NHS, free at the point of use, is very seductive to voters. Public sympathy with the junior doctors is therefore fragile and finely poised.

The government cannot be blamed for trying to respond to public expectations, nor for taking steps to maintain levels of care using the levers it has at its disposal, nor even for trying to husband precious NHS resources and get maximum value for money. The GMC has sensibly not suggested that once you become a registered doctor you forego your legal right to withhold your labour – but why does everyone from the GMC downwards jump all over the junior doctors and take them less seriously than other groups of key workers? With the future of healthcare regulation currently under review, the GMC is treading very carefully in terms of its external messaging and in fairness this presents quite a difficult challenge.

But how do we square this reaction with the annual rationing of NHS funds when operations are cancelled or postponed and wards are closed as Trusts blast through their budgets in the early months of each year? It is apparently okay for operations to be cancelled if the decisions are being taken by NHS managers but not – it seems – if it results from desperate industrial action taken by junior doctors.

NHS managers are not GMC-registered nor affiliated to Royal Colleges so they are never going to be subject to any chorus of disapproval from sources such as this. Indeed, staying on budget by closing wards and cancelling operations is a badge of honour for an NHS manager or chief executive, even if these actions are enforced by grossly incompetent budgetary management earlier in the financial year.

There is a blatantly unlevel playing field here and also more than a whiff of a generational dichotomy in a traditionally conservative profession. I also have concerns that the whole establishment approach to this rancorous dispute would be sending some very unfortunate messages to the junior doctors – many of whom are already showing signs of voting with their feet and being lost to the NHS and to England forever – interestingly, the borders to a less draconian contract elsewhere in the UK are still open.