The stars align at Dentistry 16 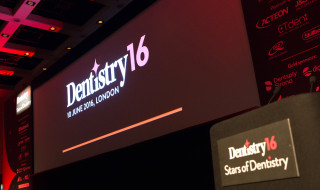 The stars align at Dentistry 16

Dentistry 16: Stars of Dentistry, the most anticipated event of the year, took place last month. Seb Evans and Louise Wilson were there to report on the day.

The biggest stars from around the world of dentistry came together on the 10 June for an unbelievable line up of speakers. Offering 15 hours of verifiable CPD in one day, over 600 attendees (350 of which were dentists) made their way to the anticipated event, which promised a line-up of 18 global superstars along with five-star catering.

A delicious breakfast was then served to the delegates in the exhibition hall, providing a great opportunity to meet and mingle before jumping into the lecture programme.

One of the biggest attractions to the morning line up was with Dr Frank Spear, his only UK lecture appearance in 2016. Speaking on ‘The aesthetic and functional management of challenging anterior relationships’, the lecture room was filled to standing room only.

Dr Spear did not disappoint either, and with his easily digestible lecturing style, Frank explained how to easily diagnose patients’ issues. He explained that many dentists begin by taking models of patients’ mouths because they don’t know where to start, but, put simply, ‘the first rule of treatment planning is you have to know where to put the teeth’, he said. And a model doesn’t help with this.

His lecture then walked delegates through case studies  showing some extreme cases. In some of the cases, there was so much work to do, it wasn’t obvious where to start. Following his first rule, Dr Spear then introduced a few further simple rules he followed in order to move the teeth into the correct position for the patient’s face. He spoke about the role orthodontics, orthognathics and implants play and how they can all be integrated into a patient’s treatment plan.

Dr Spear’s eye-opening lecture was welcomed by not only the delegates, but also some of the other speakers on the line up for the day who could be spotted in the audience. Despite adding additional seating in the lecture hall, many delegates were forced to stand, but were kept fully engaged with Dr Spear’s lecturing style.

The future is now

Christian Coachman rounded off an incredible day of speakers with a talk titled ‘Virtual lab: the future is now! The complete digital workflow for interdisciplinary aesthetic dentistry’. Here he explained what is now possible in dentistry and how many aspects of treatment have become digital.

His eye-opening lecture showed how digital technology was enhancing modern dentistry and making it more predictable. Christian started by explaining that many problems come from a lack of vision, the challenge is how to become a good smile designer and digital technology can help with this. Referring to Frank Spear’s talk in the morning, Christian pointed out that a model can’t teach us much, but if we scan a patient’s mouth, we can then use the software available to dentists to ‘play around with a patient’s smile’, move the teeth into the correct position and work out how to get the teeth there. Dr Coachman pointed out: ‘The best place to make a mistake is on the computer, rather than in the patient’s mouth.’

Christian also pointed out how this technology, along with videoing the patient, can help with patient consent and treatment uptake. Once a treatment course has been decided upon, a mock-up of the final outcome can be quickly and cheaply made, the patient can try this on and fall in love with their potential future smile. Dr Coachman said that creating a motivational mock-up can increase treatment uptake by 30-50%.

Despite some of the ideas and concepts feeling like a look into the future of dentistry, Christian’s lecture actually explained what is available to dentists today. He urged dentists and lab technicians to keep up with the changing times or get left behind.

There was much excitement and expectation from delegates for Dr Lorenzo Vanini – even in the morning, delegates were eagerly gathered waiting outside before his arrival. Vanini didn’t disappoint – the audience was blown away by his lecture, which was packed full with delegates standing at the rear of the lecture hall.

‘Aesthetic dentistry in the anterior teeth: a soft and hard tissue challenge from conservative to prosthetic treatments’, Vanini spoke about how to achieve a predictable and repeatable result. Vanini also looked at understanding the right method of colour determination and learning a standardised technique of composite stratification. He looked into choosing the best material between composite and ceramic according to the clinical situation. He told delegates to ask what they would do if the patient was their mother, daughter or wife and to treat the patient with the same amount of care and decision.

As one of the most resourceful lectures of the day, Vanini elegantly provided a wealth of knowledge for improving aesthetic and restorative treatment.

Dr Bob Khanna showed a string of high profile celebrities who have received facial aesthetic treatments without a natural result. He then delved into a brief study of the face, including contributing factors to ageing of the face – including diet and loss of teeth and how ageing of the face occurs, from an inverted triangle to an upright triangle – all are vital to understand before treating a patient.

He explained that dealing with such intricate procedures on the human face cannot be studied or learnt in one day and the risk of making mistakes can even lead to blindness of the patient.

Dr Bob Khanna continued by showing the audience more than just testimonials from happy patients – he explained videoing patients played a vital role in his work, showing the patient journey, where they have begun through to how happy they are after treatment.

Elsewhere there were 18 dental superstars across the lecture programme. Dentistry magazine’s very own Kevin Lewis gave an engaging and entertaining lecture on ‘Dentolegal challenges – yesterday, today and tomorrow’. Here he gave an honest view of the direction and challenges facing dentistry with regards to regulation and patient complaints. Pointing to the rise in the number of complaints reaching fitness to practise hearings,  Kevin said: ‘There has never been a better time to have an in-house complaint system.’

An interesting point noted was the changing position over the decades from ‘dentist is right’ in the 1970s to ‘patient has the right to choose’ representing the wider society today.

He finished by explaining that he believes dentists are currently being judged against aspirational standards, rather than ‘normal’ standards. This makes every day dentistry difficult to undertake without it falling below the aspirational standards the regulator believes should be achieved, despite it being perfectly acceptable.

Linda Greenwall’s informative lecture was titled ‘White, whiter and whitest innovations’. She explained some of the benefits whitening can offer patients, not just the obvious improvement in the appearance of teeth, but it has also been proven to improve patients’ oral health. Linda mentioned that 85% of patients who undergo whitening treatment return for further aesthetic dentistry after whitening. Following on from this Linda introduced delegates to the latest products currently on the market for whitening and explained what she prefers to use depending on the situation.

David Houston covered the business side of dentistry and he started by saying ‘If I can do it, anyone can.’ His lecture, titled ‘Driving turnover and profitability in dentistry’, talked delegates through how he had built his Houston Group of Dental Practices and the lessons he had learned along the way. Comparing dentistry to airlines, he explained that both industries work in similar ways:

David highlighted new ways practices can receive additional funding. One such example he used was becoming an educational supervisor, he said ‘keep an open mind and look outside of just dentistry’.

During refreshment periods, the exhibition hall was the place to be. With over 60 exhibitors and food and banquets fit for the stars, the hall was a buzz of activity during the intervals.

There was a hustle and bustle around all the exhibitor stands, which delegates reported as being ideal for seeing what each exhibitor had to offer without getting lost on big stands – it was all there at delegates’ fingertips from one exhibitor to the next.

After party with the stars

At the end of the day FMC hosted a ‘VIP Champagne and canapés after party with the stars’ where delegates had the chance to meet and mingle with their favourite speakers over a glass of Champagne.

Belmont, diamond sponsors of the event, hosted a prize draw for a Salmanazar of Bollinger Champagne, with Mishal Sachdev walking away as the winner.

After a tremendous, energy-packed, calibre-rich day – full to the brim with new information, advice and new areas to engage into – an inexhaustible supply of champagne and five-star canapes at the after party with the stars provided a well-deserved and refreshing reward to end a day of days.

After the success of Dentistry 16, the organisers have been moving fast to continue the same momentum into next year.

Make sure you get your tickets early by calling 01923 851771, emailing [email protected] or visit www.starsofdentistry.co.uk.