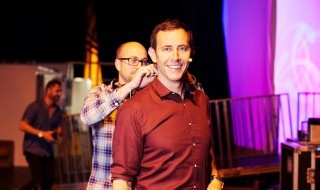 The two gentlemen – for whom perfect smiles are an important part of their careers – are part of a growing trend of adult males seeking smile makeovers.

The results of a recent survey conducted for Align Technology have revealed The UK’s ‘ideal’ male smile is a composite of Robert Pattison’s lips, David Beckham’s teeth and Orlando Bloom’s chin. However, striving for the male ideal is troubling many men and another study, conducted by Sinclair IS Pharma, showed that dissatisfaction with their facial appearance prevents 76% of men from having their photograph taken and 27% going on a date.

Whilst we can’t change features without resorting to cosmetic surgery, changing the appearance of the teeth (and often the position of the lips and jaw) is an aesthetic intervention that is perceived to be much more acceptable to men thanks to advent of new, discrete orthodontic treatments such as clear aligners.

The fitting process is rather like being measured for a suit. The aligners are tailor-made for each patient using impressions taken of the teeth, which are converted using 3D analytical technology during the treatment planning phase.

As Dr Nathwani explained: ‘My male patients in particular love seeing a prediction of the way their teeth will look at the end of their treatment on the screen. I show them every stage of the process as the teeth move into position incrementally before their very eyes.’

Aligners are removed for eating and drinking, which also makes them more acceptable to men, according to Dr Nathwani: ‘Men, who often find flossing a faff, don’t have to worry about removing trapped food or braces impinging on their love lives’.

Fit for the silver screen

Andy Friedlander said: ‘I have appeared on national TV and commentated at major sporting events without anyone knowing I was wearing my Invisalign aligners.

‘Clear speech is vital to my career as a broadcaster and so it was vital to me that my diction was not affected in any way by my treatment. In fact I would say that if anything my speech is clearer as the aligners make me enunciate more carefully.’

He added: ‘HD TV also picks up minute details, which was why I wanted straighter teeth in the first place, yet no one has picked up on the fact that I have my aligners in.

‘However the secret is out of the bag now and millions of viewers will be able to witness my transformation as the weeks go by!’

You can follow Andy’s progress on Twitter @andyfrielander. Meanwhile Dr Hanel Nathwani, who is treating Andy, can be found at www.dr-hanel-nathwani.com.