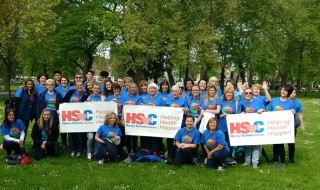 Henry’s Angels volunteered at Moonwalk London for the fifth straight year in May raising money for cancer research causes.

Henry Schein UK’s group of 43 volunteers, Henry’s Angels, assisted until midnight at Moonwalk London, a charity walk around London at night to raise money for breast cancer, acting as directional marshals, selling Walkwear clothing and four team members even participated in the walk, raising £3,000 for the cause.

Henry’s Angels was formed in January 2011 by Team Schein Members Ellie Nightingale, Lyn Yorke and Lynsey van Wyk, who wanted to put together a lasting programme of volunteers wishing to give back to the local community.

Henry’s Angels has gone from strength to strength, now with a presence in four locations in the UK, and has organised 37 projects that have included nearly 400 volunteers working more than 4,000 hours.

The Angels support four projects each year and have already received tremendous support from local companies, hotels and services.

For more information about Walk the Walk, please visit the charity’s web site at www.walkthewalk.org.