Ministers must do more than just talk about prevention, says BDA 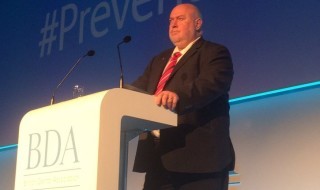 Ministers must do more than just talk about prevention, says BDA

Mick Armstrong, the British Dental Association (BDA) chair, has called on the profession to stand together, and show government the consequences of decades of indifference to oral health.

In his keynote address to the British Dental Conference and Exhibition, Mick outlined the BDA’s plan to address the root causes of the big issues facing the profession, including declining morale and continued regulatory failure.

‘Successive governments seem to have forgotten that dentists are even part of the health system. It’s up to us to show them the consequences of that casual disregard, in Britain’s deep and persistent oral health inequalities, and the growing numbers of children lining up for tooth extractions in our hospitals,’ Mick said.

‘While ministers simply talk about prevention, we are applying the principle to our profession. We are committed to helping colleagues who are under stress, and we know their interests are best served by tackling root causes, be it failed contracts or overweening regulators.

‘The sugar levy saw a debate kick-started by this profession win the day. Whether it’s on oral cancer or NHS bursaries, our goal is to confront problems before they are felt at the chairside. We will speak up for dentists, work alongside our healthcare colleagues, and stand up for our patients. And we will show ministers why they cannot treat this profession as a sideshow.’