Stirring up the energy for change 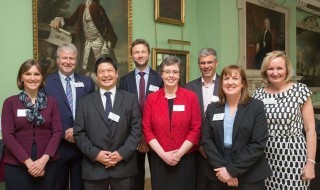 Stirring up the energy for change

A stakeholder’s meeting organised by the British Society of Paediatric Dentistry (BSPD) at London’s Foundling Museum has given a kick-start to collaborative working with other agencies and organisations committed to bringing down the barriers to improving oral health in children.

Representatives from a wide range of organisations concerned with dentistry and children’s wellbeing contributed to the meeting, which featured Q&As and panel discussions.

One recurring theme of the day was that too often dentists work in isolation from other healthcare providers and this makes it difficult to challenge the status quo. As participants committed to sharing ideas and information in future, it was clear that at least one barrier to the improvement of oral health in children was being broken down.

Robin Mills, president of the BSPD, said in his welcome that when the Foundling Museum was established in the 18th century, children were getting a raw deal. This was still true today, he said, highlighting the high number of children who never see a dentist as well as the surprising move towards funding adult-only NHS services in some areas.

A major discussion point was the implementation of commissioning of children’s dentistry. Stephen Fayle, who chaired the NHS England working party to produce a Guide for Commissioning Paediatric Dental Services, highlighted why change is essential with statistics such as:

Mr Fayle said that while he deplored the numbers of GAs, it was important that they were now taking place exclusively in hospitals as this had reduced the number of child deaths. There had been no deaths since the introduction of new guidance in 2000 but prior to that, at least one child a year died while undergoing an anaesthetic for dental treatment. And children today are far less likely to have a repeat GA, he said, especially when treatment is planned by a specialist in paediatric dentistry.

Sandra White, director of Dental Public Health with Public Health England also acknowledged the clamour to reduce the number of GAs on children for dental extractions. But, she said, GAs are currently essential for treating children with high needs – the challenge is to implement prevention and improve children’s oral health not to focus on GA numbers. If the number of operations was reduced as things stand, children wouldn’t get the treatment they need.

Ms White also spoke about the importance of water fluoridation, acknowledging it ‘takes guts’ to stand up to the anti-fluoridation lobby. She said that there needed to be an energy for change. This is particularly important as local authorities now have a legal obligation to commission oral health programmes.

Clare Ledingham, BSPD’s secretary, who described the work of paediatric dentists and why their contribution is so important, said: ‘I think you can see we are trying to make a difference but we can make a bigger difference if we work together’.

Dave Munday, professional officer of Unite’s Community Practitioners and Health Visitors Association offered the support of his members to the BSPD, as did representatives of other organisations who welcomed the opportunity to network with people sharing their concerns and passions.

Delegates were clearly inspired by the afternoon presentations from a panel of innovators who spoke about their work in reaching the hardest to reach children. Representatives of pioneering projects included Ingrid Perry of Teeth Team in Hull, Ben Underwood who has devised the BrushDJ app, dentist Jason Wong who is introducing accreditation in Leicestershire for colleagues with successful child-focused programmes and Andy Evans of Dentaid.

Martin Fallowfield, head of professional relations for Denplan said he felt proud to be part of the profession of dentistry having heard about the work of the four panelists which was all undertaken on a voluntary basis.

The audience also heard about:

Claire Stevens, media spokesperson for the BSPD, said it was clear there was a willingness on the part of everyone to share information in pursuit of improved education, prevention and access to services for patients aged 16 and under.

‘We need to stop looking at oral health in isolation and look at teeth in the context of overall health. We have the opportunity to make a difference and I am excited to see what happens as a result of today’s meeting’.

All speakers and delegates, she said, would be invited to share ideas and innovations in order to maintain the momentum generated by the meeting.